Well, we may never get much help from the Official Sinaiticus Site (they will be too busy no doubt to respond).  But we need a definitive answer on exactly what Scribe D was responsible for (last week we noted that they listed the rest of the entire Quire 77 as the work of Scribe D!).

Before we set off, we will give the up-to-date discussion of Scribe D by Myshrall, an excellent and thorough piece by the way.  Here we will find more useful keys for sorting which scribe is which:

"Scribe D was an excellent speller, A was poor, and B was appalling! One must be aware of the circularity of some of this reasoning though. If one assumes that a scribe is a poor speller, then one will try to assign all the texts with spelling mistakes to that scribe, which many not be so. Not every scribe was entirely consistent, so ther must be more concrete palaeographical reasons for identifying a hand.
Several individual characteristics distinguish the three scribes of Sinaiticus, although the general appearance of the hands is very similar... The superline of the final nu (i.e., a nu found at the end of a line) by Scribe A partly covers the preceding vowel, whereas with Scribe B it is placed more to the right and goes further into the margin (M & S, Figure 6). The line endings themselves also help to identify the hands (M & S, Figure 7).
For Scribe A, compression begins a long way back into the line at the 6th or 7th letter(11th in poetical texts). The upright slopes become elongated and the rounded letters diminished to allow the writing to be compressed into a smaller space.
For Scribe B compression rarely affects more than three letters, and those evenly.
Scribe D resembles Scribe A in the final letters but there is no elongation of the vertical strokes. IN addition, he seldom diminishes more than three letters at a time.


The KAI compendium by Scribe A is in the form of an oblique stroke at an acute angle from the bottom of the K. With Scribe B, the angle of the stroke is flatter, and the stroke often shorter (M&S, Figure 6).
Scribe D has a curved stroke on his KAI compendium which is very distinctive.

Scribe A never uses the diple (">") to fill in the ends of empty lines. Scribe B uses it very rarely; no more than once every three pages in the prophetic books and less in Hermas (with the exception of one page in Jeremiah where he uses it 12 times). However, Scribe D uses it in abundance, sometimes doubled (">>") to cover erasures, which makes his NT cancel leaves stand out. The hand of Scribe D is smaller, with an undulating effect as the rounded letters are smaller. This has led M&S to say that Scribe D is a far superior scribe, due to his spelling and style. (M&S, p. 23). 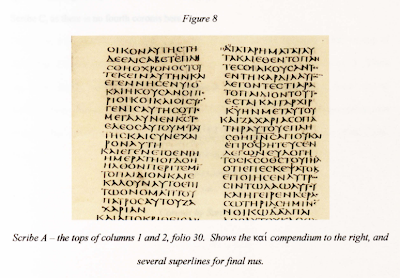 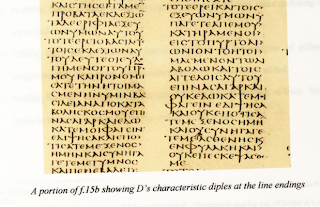 Although the letter shapes of Scribes A and D are very similar (so similar in fact that I could not tell a difference between the two scribes, apart from through the following features), there are certain signs that can be seen showing these pages are by a different hand:

(1) Scribe D uses diples ("<", ">") to fill in the ends of his lines. these number 8 on page 10, 17 on page 10b, 17 on page 15, and 31 on 15b. Scribe A rarely uses diples, so this sudden abundance indicates a different scribe. An example of Scribe A's diples is on 3b/4/24.
(2) Scribe D's KAI compendium is more curved than Scribe A's within the text. This can be seen on 10/3/1, 10/4/26, 10b/1/28, 15/1/16, 15/2/30, 15b/2/20, 15b/2/46, 15b/3/40. For an example of Scribe A's compendium see 3.5 (1b/4/30) and throughout the rest of Matthew.
(3) Scribe D's spelling is generally more precise. There are fewer itacisms on his pages, as well as basic spelling mistakes. Itacisms found, number 8 on pg 10, 7 on 10b, 7 on 15, 4 on 15b. This compares to Scribe A's 41 on p.11, 40 on 11b, 38 on 16, 34 on 16b. (pages chosen follow on from Scribe D. The same is true for any of Scribe A's leaves.)
(4) Scribe D tends to use fewer abbreviations in his text, these including Nomina Sacra and numerals. (I haven't counted these because the number of abbreviations varies depending on the number of Nomina sacra.)
The Cancel Leaves of Mark and Luke
There is only one cancel leaf in Mark/Luke, which contains the end of Mark (14:54-16:8), and Luke 1:1-56. As this cancel sheet (two folios) was in the center of the quire, both leaves are consecutive, 76-4 and 76-5, called folios 29 and 29b by Lake.
These pages were replaced by Scribe D, possibly because Scribe A made an unusually serious mistake. The same features of the change of hands can be seen as in the cancel leaves of Matthew. The number of diples used in Mark are 20 on folio 38, 20 on 28b, and 16 on 29. The number in Luke are 5 on the rest of 29, and 11 on 29b. This suggests that Scribe D was trying to stretch Mark out onto another column, but does not necessarily imply that the original problem was with the end of Mark, although this is always an option. Also indicative of Scribe D here is the spelling of Ιωανην for Ιωαννην in Luke 1:13.
However, on this cancel leaf we do have Eusebian notation unlike in Matthew, and we do have a fair few nomina sacra, 10 examples on folio 29, and 23 on folio 29b. THis includes the first occurrence of CPI for σωτηρι. There are also some itacisms here but they mainly involve propoer nouns such as Elizabeth Ελεισαβετ Ελισαβετ. There was a lot of variation in the spelling of proper names, so Scribe D can still be seen as an accurate speller.
The importance of the indentification of cancel leaves is that it shows how thoroughly the MS was revised in the scriptorium. It suggests that it was destined for somewhere quite important because of the care taken in producing it, with appearance being as important as text. Only when it reached the "C Correctors" did the text become of fundamental importance, hence the numerous corrections carried out at that time. This can be seen because the corrections were carried out in a more careless way than the earlier ones.
The other major complication of the cancel leaves is that they indicate the number of people working on one text at one time. This implies a scriptorium background for Aleph, as privately copied MSS would probably have been done by one person. Scribe D could be viewed as the senior scribe, who probably skim read the text looking for obvious errors before it went out. This would explain why his corrections would tend to be bunched, because if he noticed one error he would probably concentrate more in that area on finding problems, and then relax again when the text seemed to be going alright. It is even possible to hypothesize that in areas where many mistakes were made the scribe was tiring, and ready for a break, and then when the text suddenly rights itself he had stopped and had a rest.
The identification of Scribe D for these pages has repercussions for the running titles. Within these pages Scribe D spells Ιωανην for Scribe A and B's Ιωαννην. Byu demonstrating D's spelling of this proper noun, he can be ruled out for the running titles, superscription and subscription of the Gospel of John. The other major importance of this identification is that it proves that cancel leaves were written for Sinaiticus, showing that accuracy was of great importance for this MS. It also shows that it was not necessarily the original hand that completed the cancel leaf."
A.C. Myshrall,
Cod.Sinaiticus,
Its Correctors & the Caesarean text of the Gospels,
Dissertation, (Birmingham U., 2005)

We are now I think ready to try an analysis of the surrounding pages, to determine the actual extent of the work of Scribe D involving Mark's Ending and the modified Quire 77.

Have you an idea of when the different scribes wrote relative to each other?

Great to have you join us, Stripe!

The current opinion is that all three scribes were working in the same scriptorium where the MS was produced, before it left there (i.e., was published or released, or delivered to a client).

Those who promote the MS want to give it a date at the early end (e.g. 320-340) while others suspect that both Sinaiticus and Vaticanus may be much newer, and are really later copies of MSS produced in those days (e.g. 350-380).

In any case, it looks like all three scribes were contemporaries.

Scribe D is believed to have been the 'Corrector/Overseer' of MS production, at least for this copy.

These large "Great Bibles" could have taken as long as a year or two to complete, and scribes may have been changed in the process of making them.

Also, although we have reported what Myshrall has said correctly, as below:

"within the Gospel of Matthew in Aleph, Scribe D has replaced one sheet of parchment (2 folios). This stands out because the rest of the text is by Scribe A. The sheet replaced is Quire 74-2 and 74-7"