It has taken some time, but now we are approaching the more interesting aspects of the making of Sinaiticus:

An examination of the Quires by others has revealed the basic quire structure, and groupings of the folios.  This is important, for it gives us important clues as to how the task of writing and compiling the NT was carried off.

The text was written quire by quire (in folded 8 folio sections).  However, the planning was carried out on a larger scale, to calculate and provide just enough vellum (a very expensive material) for the task.

John was done separately, on two quires, beginning at the top of a new quire, and the second quire consisted of only three sheets (quire 81 has only 6 folios).   The Collection of Paul's letters was begun also on a new quire (82-1), so we know that quire 81 probably never had 8 folios.  (Paul follows John in Aleph.  1st Cor. begins immediately after Romans on folio 82-7verso, column 3, showing that the letters were treated as a group and copied continuously in quires of 8).

This information, combined with the layout of the Synoptics shows that the Synoptics were done together, and laid out on six quires, with the scribe periodically checking the page-by-page progress, and compressing or expanding the material by columns as required to keep pace and arrive at the correct place at various points in each quire.

This process makes it important to note that although Quire 79 only has 7 folios, it must have started with 8, because the quires would be assembled in a standard way before the text was planned and written.  The reason for this step is to prevent the mixing up of pages, while breaking the job down into reasonably sized tasks.  When the quire was complete, the 8th blank folio would have been trimmed off. 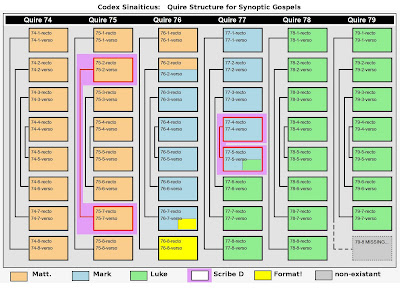 We can now consider the replacement-sheets.

We already know that the reason for replacement-sheet 1 (folios 75-2, 75-7) was a severe and problematic omission of large size (see previous post).   This was done long after the entire Synoptics section at least was complete, because the Eusebian marks are missing.

But this is not so for replacement-sheet 2 (folios 77-4, 77-5):  This on the contrary, appears to indeed have been done certainly before the manuscript ever left the scriptorium, and even before the Eusebian marks were added, since they are present on this sheet.

Since there has not been any real addition of unusual material here (not even the Short Ending of Mark was inserted), some have conjectured that there must have been an unknown omission in the first six columns of Luke, for this would leave the format of the critical page the same, but also explain the extra letters here squeezed in by Scribe D on the last two columns of 77-5 recto and also 77-5 verso (about 315 extra letters in Luke 1:1-56.).

This is an attractive explanation, even though we have only indirect evidence in the compressed text on the replacement sheet (there seems to be no surviving omission this size).   If this is ultimately plausible here, then it is equally plausible in regard to replacement-sheet 1 (folio 75-2), where there is also a discrepancy in the quantity of text and that suggested by the surrounding pages, of between 120 - 300 letters.


The only drawback with this, is that it doesn't explain the behavior of Scribe D in regard to the last nine columns of Mark. 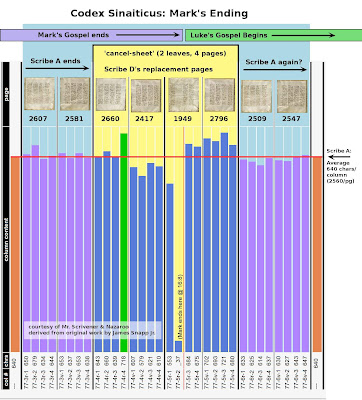 There (Part 7) we saw that again we have extra material on the first page of the cancel-sheet (101 letters on 77-4 recto, 78 of them crammed into the last column).   Why did Scribe D do this?  He should have easily estimated that he had plenty of space, including the now nearly blank 2nd column on 77-5 recto.

In fact, after having stuffed 77-4 recto, he had room for 853 more letters at normal pacing.  But when its obvious that you are starting with room for at least 750 letters in page 2, why cram 100 of them onto page 1?  It makes no sense, especially when the scribe has the old page he is replacing in his hand, and he's still in the scriptorium.

But the long ending of Mark (LE) is only 982 letters.  It does make sense to squeeze 100 letters into the 4 columns of page 1, leaving space for 850, if you're going to insert the LE.  You now only need to squeeze an extra 132 letters into page 2 and 3 (over 6 more columns).   The real question then is why did he change his mind, and leave it out?


Questions of Authority and Cost:

The answer must be in the real background circumstances of the Codex's manufacture.   As we replied to James Snapp Jr.  in the comments for Part 6 of this series, it is a mistake to think that the Corrector/Overseer was the "order-giver", in the sense that he could make autonomous and independent decisions to leave out or put in something like the Ending of Mark.   He may have had authority over the scribes under his watch, but not over the New Testament text!

If we are to look anywhere for this kind of authority, it must be either much higher, such as the Abbot of the monastery, or even higher than that, such as the regional bishop.   But we could also look to the wealthy and powerful patron who was paying for the manuscript.  This person might be a bishop or even a king or emperor, or their representative.  Mr. Scrivener has given an excellent quotation of an expert estimate of the cost of making such a precious item ( Scrivener's Blog ):


"Bagnall insists that the prices of books were expensive enough that copies of the Scriptures would have been possessed, in most cases, only by churches and monasteries. Churches were concerned with charity and financial support for their clergy—thus making clergymen the most likely owners of Christian books. Listen to this quote from Bagnall:

"At the lower end, let us imagine a reader who received 10 solidi per year. A complete Bible would cost him half a year’s income. Such a purchase would have been entirely out of reach. Even an unbound short book, a single gospel on papyrus of the sort that cost a third of a solidus in the ostraka cited by Anne Boud’hors, would amount to one-thirtieth of a year’s income—in proportionate terms (although not in purchasing power) the equivalent of $1,000 today, let us say, for someone earning $35,000. People at that sort of income level do not buy books at that price. Even the best-paid of academics do not buy books at that price (62)."

Further, it is most likely that we must look to the high clergy (e.g., the office of bishop) for those who may have been able to purchase books in ancient Egypt."

In this scenario then, we would expect that someone else may have been consulted, and the word was given to leave the ending of Mark out, as perhaps it was originally penned by Scribe A.

But if Scribe A had left out Mark's Ending in the first place, what prompted Scribe D (the corrector) to replace this folio?   Part of the story is hinted at in the fact that this is a very early repair, probably done even before the quires were assembled.

Suppose now, that Scribe A had correctly laid out his quires, as the quantity of material had indicated in his master-copy, which was a special older manuscript, highly prized for its antiquity in the 4th century.   In these circumstances (the careful duplication of a venerable ancient copy for a wealthy patron), the Scribe would modify his procedure and carefully measure according to the actual text to be copied, not necessarily the standard layout for a well-known and fuller text.

But it was probably not until Scribe A got reasonably close to the ending of Mark that he noticed the ending was actually missing in his master-copy.  His natural instinct was to begin compressing his text to make room for the ending.   For proof of this, we can examine the pages of Scribe A just prior to the cancel-sheet. (see folios 77-3 recto and verso, particularly the extra material in 77-3 recto column 2 ).  He was probably quite pleased with himself, having been able to squeeze in Mark's Ending.

Unfortunately, Scribe D must have become aware of the situation after some discussion, and saw that Scribe A's action violated the directive to copy the ancient exemplar's text accurately without variation.  To make matters worse, Scribe A seems also to have omitted a significant portion of Luke's chapter 1.  The double-jeopardy of flawed ending and beginning called for the drastic measure of a cancel-sheet.  Scribe D took over the job himself, as this would require his special skill in laying out the material so that it did not alter the look and style of the book-borders and yet stayed true to the master-text.  A scenario like this would account for all the unusual features found.

Alternately, Scribe A may have indeed finished Mark without the ending, but nonetheless brought it to the attention of the Corrector (Scribe D).  In this scenario, Scribe D at first attempted to make room for Mark's Ending, but after some other consultation with a superior or the patron reversed his decision and now stretched the rest of Mark to fill the space.  However, in this case, Scribe D, while allowing the Ending to be dropped, could not pass over the extensive omission in Luke he now noticed, which had no precedent or approval as a 'reading'.  So he replaced the lost text in Luke, but had probably already planned that repair before struggling with Mark's ending.

Each alternate scenario faces the problem of accounting for the second omission of material in Luke, which will require a separate investigation.   Yet both alternatives also suggest that the scribes were well aware of the Long Ending of Mark.

In the meantime, we have accounted for all the basic features of the cancel-sheet, surrounding text, and the probable circumstances, much more thoroughly and adequately than previous proposals.