Now lets continue again with more of James Snapp Jr.'s article, in which he gets into some more detail about these pages and in particular the compression and expansion of text in the columns.  Again we give the diagram to help readers locate the columns under discussion: 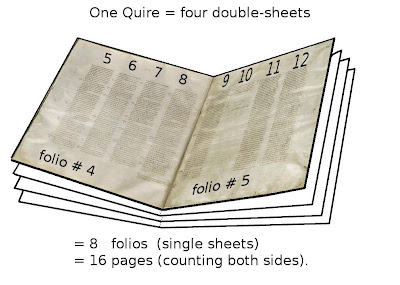 
The Last Two Columns of Mark in Codex Sinaiticus

"[James' diagram] shows the arrangement of the text in columns 9 and 10 of the four-page (16-column) cancel-sheet at the end of Mark in Sinaiticus.  [here we have inserted below a good photo of this page with columns 9 - 12:]

The text of Mark from 15:19 (which appears earlier in the cancel-sheet, at column 5, line 11) onward has been stretched so as to fill more space than it normally would. However, from column 4, line 1 to column 5, line 10, the text was written in a compressed script, with the result that column 4 contains 707 letters. If the copyist had continued to write compactly, the cancel-sheet would have had plenty of room for the Long Ending. (However, if the copyist had continued to write so as to average 635 letters per column, if he had tried to write the Long Ending he would have reached the end of column 10 with 206 letters to go. Thus it is practically certain that the original pages of the end of Mark in Sinaiticus did not contain the Long Ending.)

As you can see, column 9 [folio 77-5 recto at top] contains only 552 letters (significantly less than the typical amount of about 635). Columns 11-16 [including folio 77-5 verso below] (containing Luke 1:1-56) are all written in compressed script; in those six columns the average column contains 691 letters. This suggests that the cancel-sheet was made because the original pages featured an accidental omission of text in Luke 1.

That still does not explain why the text is compacted in column 4 and in the first 10 lines of column 5.

One theory is that the person who made the cancel-sheet began by using an exemplar which contained the Long Ending, and as he was writing column 4, he sensed that something was amiss, so he began to compact the text so that the Long Ending would fit, but then (at the beginning of Mark 15:19) he consulted the exemplar used by the original copyist, and realized that it did not contain the Long Ending. He had to stretch the text of Mark from that point on, in order to avoid leaving a blank column between Mark and Luke.

Our first observation is this: James writes in brackets above,


(However, if the [original scribe A] had continued [at] 635 letters per column, he would have [had] 206 letters to go [for the Long Ending]. Thus it is practically certain that the original pages ... did not contain the Long Ending.)

This statement, while technically true, is however misleading.  All it amounts to is that the original scribe A didn't have room to fit it in, and stopped his work, which begs the question.

One fact that is simply not taken into account in various of James' options is this:  Elsewhere, scribe D always inserts single cancel-leaves, not double-sheets of four pages (i.e., folio 10, 15, 88, 91).   Why recopy four whole pages here?   The small amount of text in the Lukan variant (proposed originally by Tischendorf, for which there is no textual support at all)  cannot justify a four-page replacement, nor can such a small factor explain why the original scribe A would have needed to turn to scribe D for help.

Given this most remarkable extra feature, the replacement of four whole pages, with obvious attempts at adjusting all the columns preceding Mark's ending, it seems far more plausible that the problem was Mark's ending;  Scribe A appealed to Scribe D,  and Scribe A's work was taken over, removed and replaced by Scribe D.

James' "Theory 1" above is inadequate, because it mixes up the roles of the two scribes.  It was in fact Scribe A who was copying from an exemplar having Mark's ending (as suggested by all other MSS everywhere, except B).  He was the one who noticed the problem (the inadequate space of the pre-allocated  pages), and therefore the 2nd Scribe D's subsequent waffling attempts at adjusting the pace were done with the problem already perceived.   This is evident because at this time the pages were already being replaced.

The fact that Scribe D may have changed his mind, or received new (but ultimately unrealistic) orders on how to proceed while in the middle of the task, is hardly surprising, nor is the fact that the pages were not replaced yet again, given the cost of vellum.

Whatever premises you are using for the proposal that "the original Scribe A didn't have room to fit it in" are flawed. The only way he wouldn't have had room is if he had run out of parchment, which he obviously did not do, inasmuch as he continued to write Luke, John, and so on.

Also, you wrote, "One fact that is simply not taken into account in various of James' options is this: Elsewhere, scribe D always inserts single cancel-leaves, not double-sheets of four pages (i.e., folio 10, 15, 88, 91). Why recopy four whole pages here?"

You wrote, "The small amount of text in the Lukan variant (proposed originally by Tischendorf, for which there is no textual support at all) cannot justify a four-page replacement." The loss of a passage the size of, say, Luke 1:5-8 would justify a cancel-sheet.

You wrote, "Given this most remarkable extra feature, the replacement of four whole pages, with obvious attempts at adjusting all the columns preceding Mark's ending, it seems far more plausible that the problem was Mark's ending."

Although it might look that way at first, I think that the more you consider all the factors involved you will conclude that the original pages did not contain Mk. 16:9-20. Just calculate the space that Scribe A would have used to write Mk. 14:54-16:20, and see if it fits the space that would have been available in the original pages if Luke 1:1-56 was also written in the remaining columns (with Luke 1:1 at the top of a column).

You wrote, "The fact that Scribe D may have changed his mind, or received new (but ultimately unrealistic) orders on how to proceed while in the middle of the task, is hardly surprising . . . ." But Scribe D was the diorthotes; he was the order-giver, not the order-receiver.

Hi James: Thank you for your comments.

First, I see now the point about all pages being conjugate leaves (i.e., originally attached in pairs, as parts of Quires or bundles, apparently of 4 each). It seems clear from your pairing off that in every case where a 'cancel-sheet' is involved, 2 folios and 4 pages are involved. They only appear disconnected due to their position in the "stack" that makes up a Quire, and so can be as far away from each other as 7 folios.

Since all these replacements/corrections were done at the same time, that is, in the scriptorium when the Quires were being assembled, this looks like the expected procedure when a significant correction must be made but there was no room otherwise on the pages as they stood.

The only issue remaining for the 'cancel-sheet' option is, when is this drastic a solution required? e.g., how big does the correction have to be to justify a large sheet of vellum?

As you say, perhaps "The loss of a passage the size of, say, Luke 1:5-8 would justify a cancel-sheet.". But I think that this proposal must be admitted as still having conjectural status at the moment. In fact, any random accidental omission of serious size, discovered after most of the sheet or quire was written, would have amounted to the same thing.

(2) James: "The only way ["the original Scribe A"] wouldn't have had room is if he had run out of parchment, which he obviously did not do, inasmuch as he continued to write Luke, John, and so on."

Here I think we disagree on the basic way this manuscript was manufactured. You envision a simple procedure of picking up assemblies of blank Quires, or else pre-assembling the whole book (or most of it), and copying out the text in a sequential order, using vellum as needed, and never worrying about planning the layout, or calculating the amount of vellum.

I must object to this naive picture: The vellum, very expensive and valuable because of limited production and time/labor costs, would have been jealously guarded and carefully allotted to each task.

The scribes were not free at all to 'use as much space as required' based on their preferred style of calligraphy, but rather were told very precisely what was expected, and strictly guided in their work. The layout would have been carefully planned, allowing different scribes to independently work on separate books or sections of the 'Great Bibles'.

The scribes would also be expected to keep their texts generally aligned and occupying a fixed amount of space, meaning that at various and frequent points in the text, predetermined columns were to have key parts of the text, such as book beginnings, and certain paragraphs. This would not only be required to control vellum usage, but also plainly explains the startlingly frequent practice of bunching a few small letters at the end of each line to regulate text spacing, as well as rigid adherence to Nomina Sacra and the use of substitution of "-" for "N" at line-ends and even a primitive ligature.

Other signs, like copying even the line-breaks from the master when they don't align with the new text also support the purpose behind all this effort. This was certainly not done 'for style', since it all marred the look and readability of the text.

Thus the scribe would not have 'free reign' if his work went overbudget and his text spilled into the next Quire or overrode the next expected end of a section. When such accidents happened, the intervention of the Overseer/Corrector in removing a sheet and rewriting it would be mandatory.

This I think reflects a basic misunderstanding of the functions of the parties, and perhaps even early monastic life as a whole, or at least is misleading to a modern reader.

Even small monastery/scriptoriums would not be autonomous 'democracies' or loose 'confederations' of monks. There would be a rather strict hierarchy, and while Overseer/Corrector might be an enviable position and reflect long service and expertise as a scribe, this person would still be under the authority of further supervisors and policy makers, a local Abbot, and finally the administrators of the whole region and its bishop. Undoubtably some shenanegans did occur, but Correctors could not have seen themselves as autonomous, even if they had some considerable latitude in practice.

It is simply not plausible to believe that a mere 'Overseer/Corrector' in MS production would operate in a vacuum or without supervision on as important an issue as the Ending of Mark, in a major scriptorium of the 4th century.

Someone, likely in allocating the vellum for this project was not aware of the master-copy's lack of Mk 16:9-20, and did not consider allocating extra vellum. This calculator was likely not a genius or skilled calligrapher, but another monk.

Upon arriving at the spot, and realising the problem, the original Scribe A would have consulted his Overseer, who took over the task and apparently gave his solution on the fly. This does not mean however, that there was no policy in place, or opinion on Mark's Ending.

It appears that the Overseer's initial solution (explaining the bunching) was going to be to include the verses. He may have been corrected himself by the Abbot or a senior copyist, and hence chose finally a solution which preserved the reading of the master-copy, and also kept the MS here in conformity with book-seams elsewhere, but allowed in principle enough space to copy in the ending at a future date, if others so ruled.