Here is a short discussion of the so-called 'schools' of Antioch and Alexandria, culled from the Orthodox site  Monachos 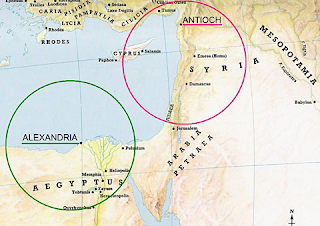 "...
With regard to the Christological discussions of our period (the later fourth and early fifth centuries), reference made in modern scholarship to the 'Alexandrian' and 'Antiochene' schools attempts to homogenise under two relatively coherent umbrellas two general approaches to Christological reflection centred round these great cities and sees. The Alexandrine 'school' is seen most often as the older, dating back at least to Arius, and including such notable figures as the sainted bishop Athanasius of that city, as well as the anathematised Apollinarius. The insistence of all three writers, as well as others of their converging tradition, upon the divinity of the Logos in the 'becoming' of the incarnation, and a tendency in each to see that incarnation as a 'taking on of flesh' by the Logos, has earned their 'school' the reputation of fostering another scholarly category: a 'Logos/sarx Christology'.
Those referred to as 'Antiochene'-for example Diodore of Tarsus, Theodore of Mopsuestia, Nestorius of Constantinople, John of Antioch-are often referred to as preferring a 'Logos/anthropos Christology'; namely, one in which the Logos is united to man, or even 'a man'. A dominant insistence upon the full humanity of the incarnate Christ characterises all those shuffled under this umbrella.
The classification of these 'schools' is rather rough-and-ready. While some cases are clear-cut (e.g. Nestorius, who is evidently a theological descendent of Theodore), others are more difficult. St Cyril is a notable example. As bishop of Alexandria and strongly influenced by the theology of his predecessor, Athanasius, the temptation is certainly to call him a member of the Alexandrian 'school'. Yet one is hard-pressed to consider Cyril's Christology of hypostatic union conformable to any definition of the Logos/sarx 'model' by which that 'school' is so often characterised. And while such a figure as John of Antioch is almost universally considered a member of the Antiochene 'school', his later Christological dialogues with Cyril, most pointedly their joint 'formula of reunion', addresses the incarnational becoming in a manner that hardly fits within the broad categories of Theodore's reflection, taken by most as the standard for Antiochene Christology.
So we must take care not to read these 'schools' not schools in any strict sense. Rather, they represent loci of converging approaches to Christological reflection centred around two great strongholds of theological activity in the fourth and fifth centuries. And despite the dangers of generalisation, which in historical analysis leads too often to a false-homogenisation, certain common characteristics of these converging traditions can be ascertained, and prove helpful in our reading of doctrinal reflection in its historical progression. In a general sense, these trends and tendencies are as follows: