Daniel (Pt 17): The Four Empires are not Local Kingdoms


In part, our perceptual difficulty with Daniel arises from the over-literal translations of the text, which don't take the context into consideration sufficiently.

For all the so-called 'scholarship' expended (usually to disprove or critique the book) very little common sense or simple logic is applied, either by translators or interpreters.  This leaves readers wading through ambiguities that shouldn't even exist.

One is the issue of 'kingdoms' vs. 'Empires'.

There is a clear difference between a local 'kingdom' or nation of city-states (such as early Italy or classical Greece) and a world-dominating Empire.

The problem is, until Empires came into existence, and for a long time afterward, there was no specialized language or name for "Empire".

In fact, the word "Empire" as we have come to know it, is a late invention, coming out of the experience of the Roman Empire (c. 29 BC - 310 AD).
An Empire is a multi-nation state spread across the globe, usually run or controlled by an "Emperor" - a word which is understood as an 'Uber-Dictator' as opposed to a local 'king' (which is nearly colorless by comparison).

When Daniel interpreted the dream of the very first 'Emperor', he had to use the language available.  King Nebuchadnezzar was naturally called 'king', because in every language, including Hebrew, Aramaic and Chaldean, there was no word for 'Emperor' yet coined.

The best one could do was say 'great king', or 'king of kings', or 'king of the world', or some such descriptive title that might try to convey the size and scope of the rulership and territory.

So Daniel uses 'king' and 'kingdom' by convention of the time, naturally in the language of his contemporaries.

We however, are not so limited, and are quite able to distinguish between local 'kingdoms' and vast Empires, and in modern English we now have modern words suited for translation and exposition that convey the meaning intended by Daniel.

The strongest argument of course is context, and here we must seriously take this context into account, and give it its due. 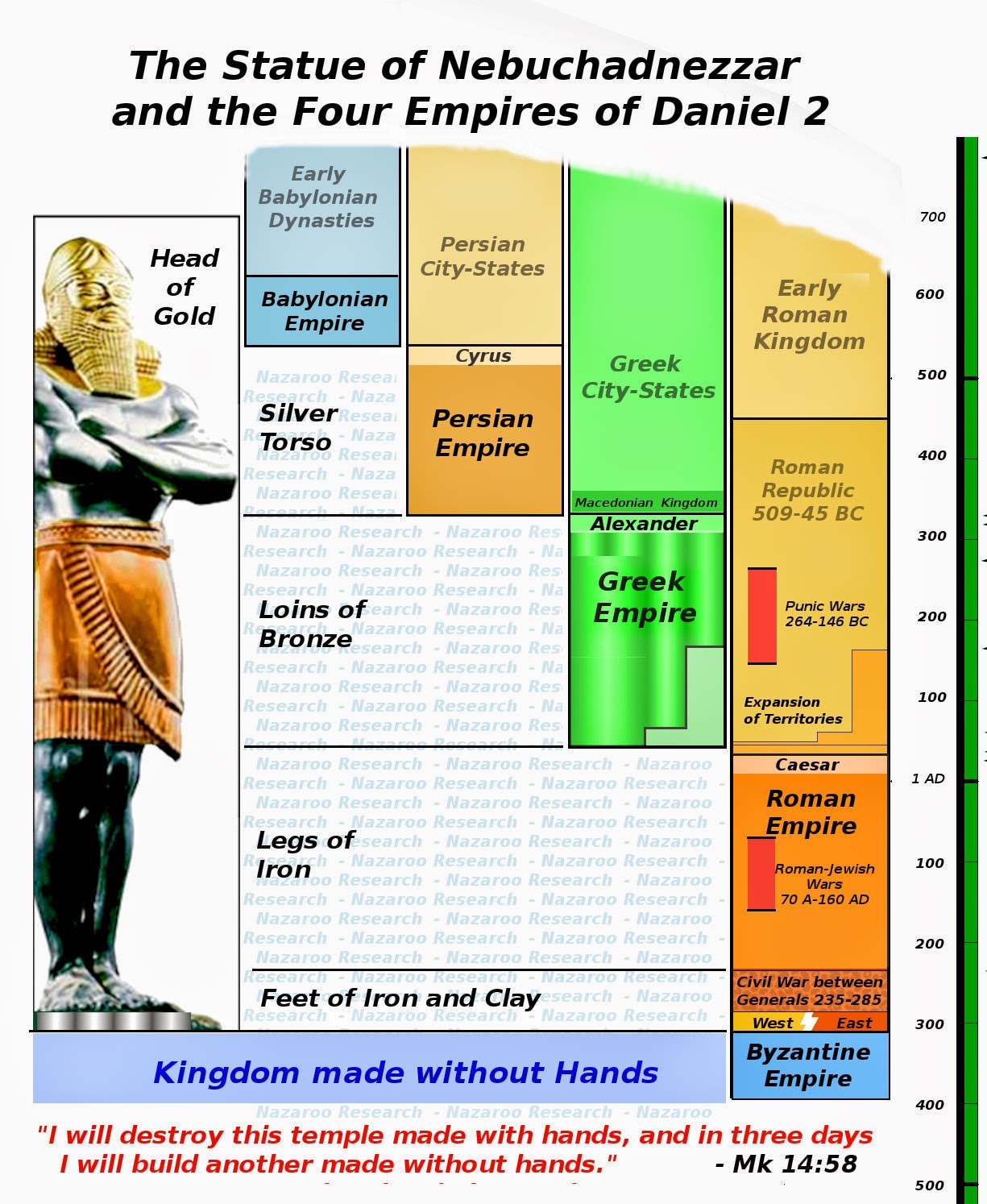 The main and obvious context is the fact that Daniel himself is a minister in the very court of the first multi-national Empire in existence, at the center of civilization.    From here, we understand instinctively that when Daniel talks about the 'great kingdoms' he plainly means 'Empires' in modern parlance.

When Daniel envisions and talks of great beasts with multiple horns, he is speaking of successive Empires and their Emperor-dictators, not local kingdoms or short-term events.

The ploy by critics to 'localize' or minimize the vast size and scope of Daniel's prophecy is a desperate attempt to account for the sharp accuracy of Daniel's prediction in naturalistic terms, by claiming it to be a late forgery.   The position of critics is that a priori, accurate detailed prophecy is impossible.

This fails however, because the very LATEST the book of Daniel can be dated is about 167 BC, because it was known to have been widely circulated by this time.

The very first prophecy however, extends to 300 AD.

Each 'kingdom' (World Empire) is very clearly and plainly identified:

(1)  Each Empire involves the same basic vast area of land.

(2)  Each Empire is successive, replacing its predecessor.

(3)  Each Empire is headed and administrated by a different ethnic nation.

(4)  Each Empire is founded by a Warlord through warfare.

(5)  Each Empire conquers the preceding Empire.

(6)  Each Empire's beginning is clearly defined on a timeline.

(7)  Each Empire's end is clearly defined on a timeline.

(8)  Each Empire has a unique character or trademark.

(9)  Each Empire imposes tribute on other nations through force.

(10)  Each Empire rules over the land and nation of Israel.

(12)  Each Empire at some point oppresses the People of God.

(13)  One Empire (Babylon) is known and two (Persia/Greece) are named.

Lets look closer at these characteristics:


(3) Each Empire is headed and administrated by a different ethnic nation.

(4) Each Empire is founded by a Warlord through warfare.

(5) Each Empire conquers the preceding Empire.

(6) Each Empire's beginning is clearly defined on a timeline.

To be clear, each Empire begins as a small and local ethnic kingdom.

They are not mere internal 'coups', political regime changes,
or even dramatic changes in administration or infrastructure.

Thus, the passing of kingship from father to son, or to co-ruler/general,
do not count as 'new Empires' (as occurred in Babylon and Persia).

Nor do internal administrative reorganizations count, such as
the (re)division of provinces or sattraps (as occurred in Persia).

Not even the failure of an heir, and division into relatively independent regions
count as a 'new Empire'. The Greek Empire remained in the control of
the Greek generals and they continued the plan of Hellenization, even
when Alexander died childless.
Thus Four Horns sprouted but remained on the same beast,
- the Goat (Greek Empire).

Each small kingdom begins as a local one, made up of a distinct and
independent nation (Babylonian, Persian, Greek, Roman).
And each of these kingdoms becomes an 'Empire' through
the conquering of foreign powers and essentially occupies
the same 'Empire Territories'.

The transition from local kingdom to world-class Empire is plainly
demarcated by the rise of powerful individual Warlord, who
relatively quickly conquers the previous dynasty and ruling nation/culture.

Even the 4th Roman Empire conquers through a handful of great military generals. 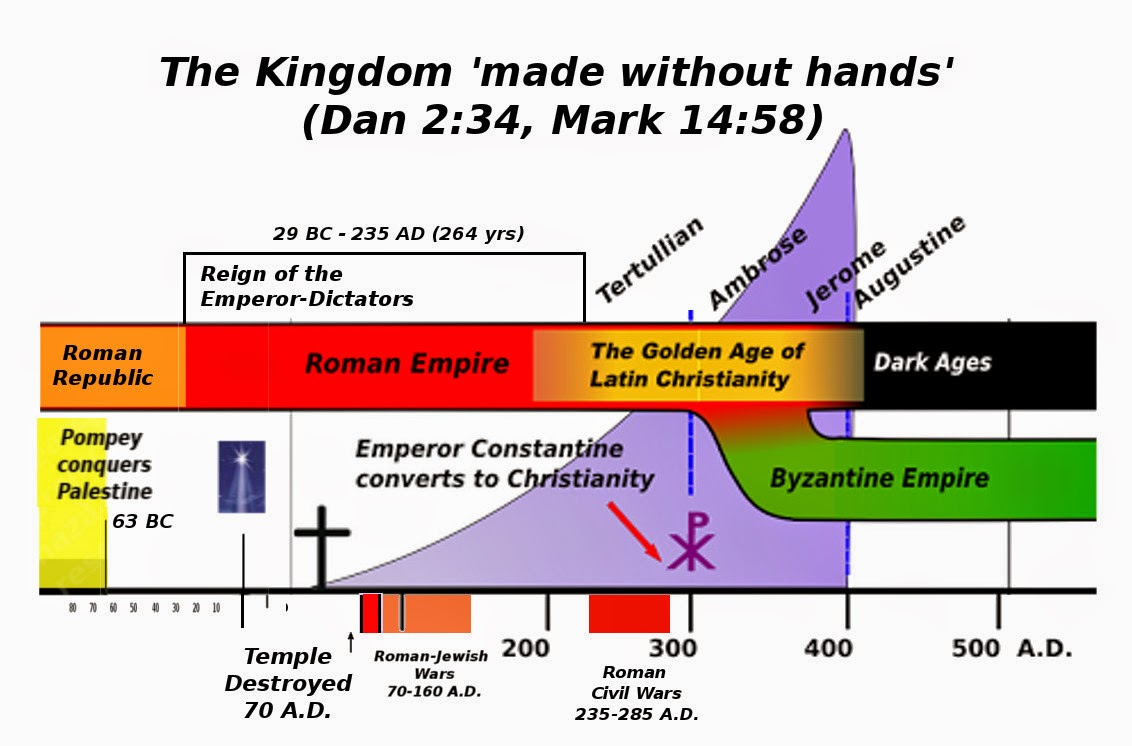 Finally, this 4th Roman Empire is NOT reconquered by a foreign power,
but remarkably, seems to implode from internal fighting and disharmony,
just as the prophecy of Daniel predicts (the feet of iron and clay).

The New Kingdom of God is according to the prophecy a physical earthly one,
but 'made without hands'. (Dan. 2:34,45)

It is clear in the original quotation of Jesus (in Mark)
that He interprets Daniel to be referring to
Jesus' own spiritual kingdom 'not of this world' (Jn. 18:36, Jn. 17:16)

Jesus self-describes His kingdom in a parable as
'a mustard seed' expanding to fill the world.

We get the sense of this in the subsequent history of Jesus' underground church
and 'body/temple' expanding to ultimately 'destroy' the Roman Empire
by 'disloyalty' to Rome and loyalty to Jesus.

In the end, Constantine found it expedient and necessary to:

(1) End persecution of Christians
(2) Legalize Christianity
(3) Assist Christianity with the commandeering of pagan temples and wealth,
(4) Become a Christian,
(5) Hold Councils intended to unite Christians under a central authority.

He did this not least because Christianity had spread so deeply and become
so popular that one could not command a Roman Army without
acknowledging and protecting Christians.

This final "Empire" was indeed such a revolutionary difference in kind,
that it ceased to mean 'Empire' in the normal oppressive sense.
It retained its army and policing power, its ability to defend itself,
and its use of military force, but nonetheless transformed, if briefly
into an unprecedented and entirely new 'thing'.

Initially all religions were granted 'rights' of practice and worship.

Christians were for the first time given powers as councillors in the court
of the Emperor.

The change was so radical that Constantine chose to abandon Italy
entirely and choose Greece as his new Capital and central base for
his new 'Empire'.

In doing this, he let the Western half fall into the Dark Ages,
fullfilling a great and terrible fate upon the old 'Roman Empire'.

This new partially Christianized 'Empire' must be recognized as the
obvious and clear fulfilment of Daniel's prophecy concerning
the 'made without hands', and having a Spiritual element unknown
to previous earthly empires.

We do not here equate Constantine's Empire with Christ's,
but do acknowledge the obvious and deeply rooted connection,
due to the rapid and successful evangelization of the old Roman world. 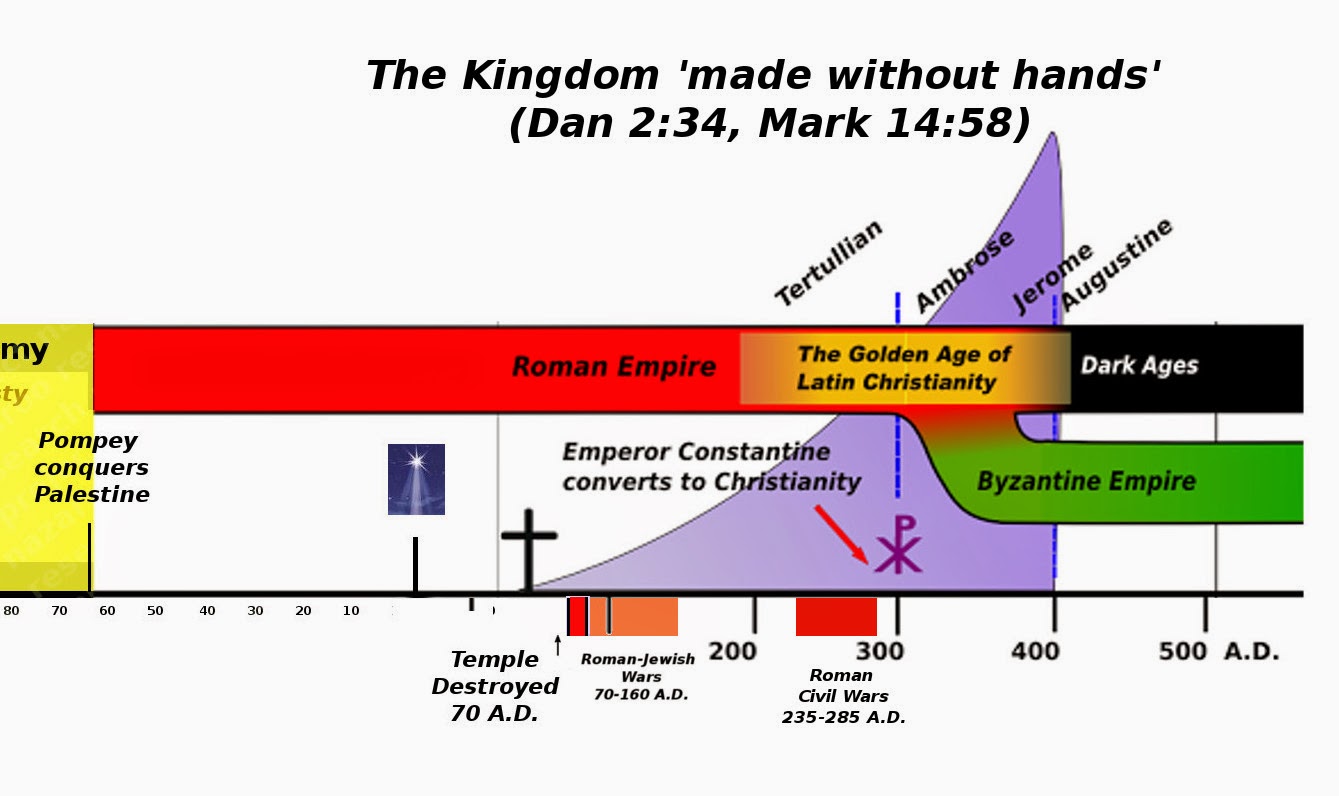