The Synoptic Problem (Pt 1): Priority of Luke over Matthew

I will begin by taking some of my previous forum posts from 2011 to bring the discussion up to speed.

Mark is a shorter gospel with very little of Jesus' teachings and sayings.
Luke is a very much expanded version with a full compliment of Jesus teachings.
Matthew is another similarly full version with teachings arranged in groups.
John is a mature gospel, focussed on deeply theological teachings.

Mark Luke and Matthew have a large amount of overlapping material,
much of it almost word-for-word, whereas John is unique and quite independent.

The overlap between the first three gospels is called "the Synoptic Problem".

The question arises, who wrote first, and who copied who?  Because it is probable that at least two of them (Luke and Matthew) copied from the others.

In pre-scientific times, not much analysis was done, and one could hold almost any viewpoint on the Synoptic Problem, and it was almost a personal preference.   Church authorities argued for the priority of Matthew because it was the fullest and most suited for establishing church authority.   19th century skeptics gave Mark the priority because it was the shortest, and their view allowed for an 'evolution' or development of religion over time, and an accumulation of stories and doctrines.  They viewed Christianity as a syncretic accumulation of superstition and fiction.

Nowadays much more of the data has been analyzed and the road has become clearer.   Particular attention has been paid to the differences between the gospels, and why and how those differences may have arisen. 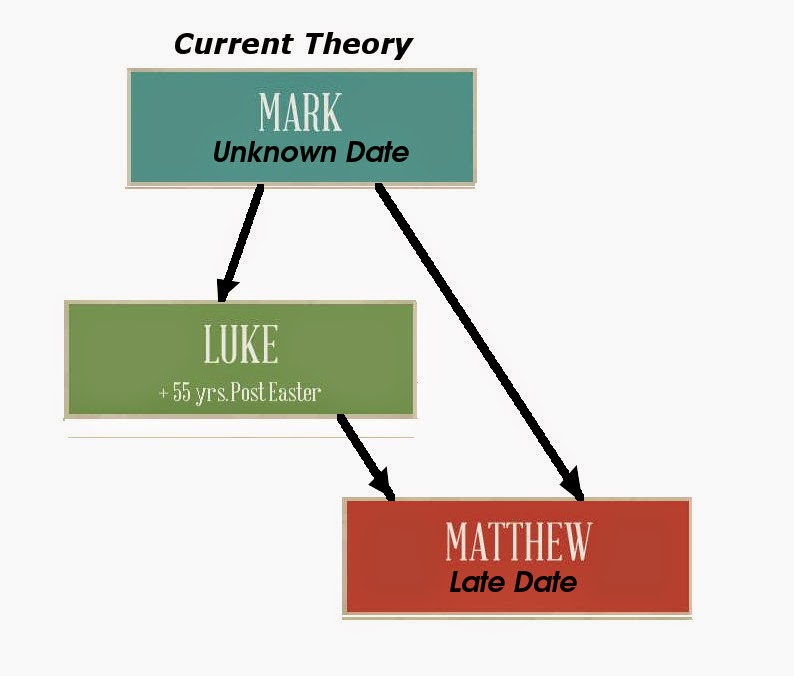 A striking example is Matthew's Sermon on the Mount:  A large speech covering several early chapters,  which contains some material covered in other gospels, but also much unique material arranged in a special format.


The "Sermon on the Mount" is an artificial literary production.
Had it actually taken place, and been recorded by the Apostles,
it is inconceivable and preposterous that Mark and Luke would have omitted it.

It can be shown to parallel the Letter of James, where the additional material is largely from.

Matthew takes Luke, and systematically removes ALL the material regarding the poor and the rich.
This would be inexplicable if Luke's gospel accurately reports Jesus' teaching, and Matthew were also authentic.

(1) Matthew takes Luke's Sermon on the Plain, and removes all reference to rich and poor:

Here "Matthew" removes the direct speech to the poor,
preventing them from asking for bread from wealthy priests,
on the basis of this sermon by Jesus.
Jesus' words are no longer about poverty, and no longer addressed to hearers.

Again the poor are cheated out of both Jesus' message,
an acknowledgement of who its for, and a practical answer.
"Matthew" has interpolated and distorted the message back to a form of Judaism that perpetuates the accumulation of wealth (mammon).

The message is no longer addressed to the hearers, but to abstractions.

Luke: "But WOE unto you rich! for ye have received your consolation!
"WOE unto you that are full! for ye shall hunger!" (Luke 6:24-25)
Matt: deleted!

Jesus' condemnation of the wealthy of His generation has been entirely erased from the speech, through a combination of interpolation and deletion.
'Matthew''s solution is as drastic as his purpose.

(2) Matthew omits all the Parables and Teachings on the Poor:

The accumulated effect is obvious.
The Poor have been entirely deleted from the Gospel,
along with the issue of poverty.


(3) Matthew omits most of the negative references to Judaism: 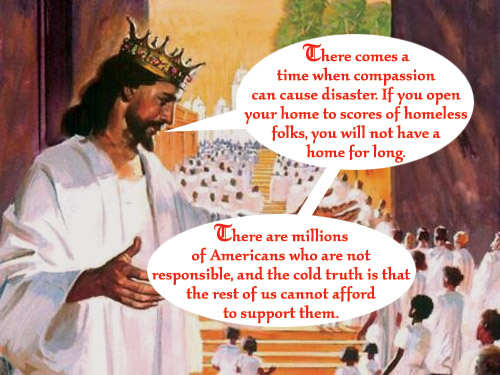 Image from Tea Party Jesus,
a Web project "putting the words of Christians in the mouth of Jesus."


Matthew is the 'gospel', rewritten for rich Jewish people.
If you missed that, you can't read.

We have made a full discussion of the Synoptic Problem with charts here: