The Ten Commandments (Pt 1): Borrowed from Egypt? No. 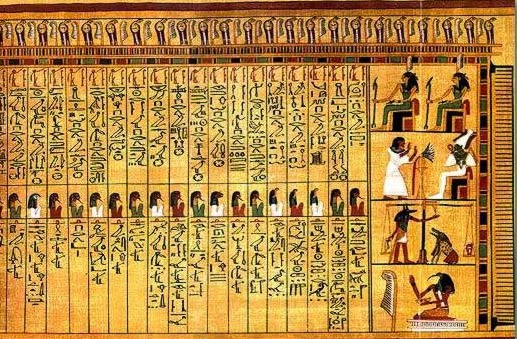 
"Some historians....have argued that the Ten Commandments originated from ancient Egyptian religion, and postulate that the Biblical Jews borrowed the concept after their Exodus [c. 1491 BC] from Egypt . Chapter 125 of the Book of the Dead [c. 1800 BC] ... includes a list of things to which a man must swear in order to enter the afterlife. These sworn statements bear a remarkable resemblance to the Ten Commandments..."

Many religious liberals, historians, and secularists have concluded that the Hebrew Scripture's Ten Commandments were based on this earlier document...'

The "many historians"  however, are not named; (as is usual with exaggerated claims), nor are their credentials offered.

The fraudulent presentation however has much deeper flaws and dishonest aspects.

For instance, they only quote a portion of the Book of the Dead (BoD) namely 13 crimes, rather than the whole passage, to give the impression of a nearly equal number of crimes/sins (their secondary source lists only 11 crimes, so they must be fully aware of the fudging).

The actual passage  however, lists over TWENTY-NINE specific crimes, after five general statements of innocence, so there is no numerical similarity with the Hebrew Decalogue of TEN unique commands intended to summarize a whole moral code.

The 29 'crimes' are a long and random (but not exhaustive) list of common offences, with no hierarchy or indication of relative importance.  They are merely an expression of a wordy prayer and claim of general innocence.

In no way can they be interpreted as a "Law Code", nor is there any evidence that the list is based on any earlier formal Egyptian Legal Code now lost.   Rather, this is just an ordinary funeral text, a prayerful plea meant to impress God(s) with its attempt at thoroughness of claim.

This discrepancy in the count makes it more obvious how dissimilar the two lists are.

Even the supposed "matches" are often at best only approximately similar in meaning:

(TC 7) Do not commit Adultery -
(BoD 13,14) - I have not Sodomized with a Sodomite.
(the interpretation here of "adultery" is dubious, since the text says literally:
"I have not penetrated the penetrator of a penetrator",
suggesting buggery.)
(BoD 14) - "I have not masturbated"  Adultery?  another implausible stretch.

Certainly these are examples of modern "stealing", but there appears to be
no specialized word for "steal" in early Egyptian,  and these were handled as separate crimes, as the text plainly illustrates.

Even the truncated source that the Ont. Consultants on Religious Tolerance (OCORT) use doesn't render any part of the BoD text as "stealing".

Other 'renderings' offered appear to contain 'glosses' or interpretations that reflect the modern liberal ideologies of the website rather than ancient Egyptian priests:

Both of these quotes appear to be 'interpretations' or elaborations offered by various unnamed translators.   The Egyptian text seems not to support it, if the UCL and JISC supported sites are reliable.  They give this for the portion of the text under consideration:

"I have not killed; I have not harmed the offering-cattle;" (Chapter 125a)

Which seems to have quite a different meaning than that offered by OCORT.

Out of 29 possible crimes in BoD, only ONE appears to correspond directly to a commandment in the Decalogue:  "murder".

But the context in both cases gives no indication that the two cultures had similar views on how to define "murder" or what the punishment should be in various nuanced cases.   We know that "Do not Kill" was a crime moderated by manslaughter and 'crime of passion' considerations, from the fact that Israelites allowed fugitives to flee to another city of refuge.  Nothing in Egyptian culture seems to correspond to these legal nuances.


OCORT do admit the following:


"One major difference between the two documents is that statues of the Gods and Goddesses formed a major part of the ancient Egyptian religion. The religion of the ancient Hebrews forbade any image or statue of Yahweh. Another difference was the Decalogue's emphasis on the Sabbath -- one day of rest each week. It is not found in the Book of the Dead or in ancient Egyptian culture."


This is not a small difference.  Hebrew Law forbade idolatry, while Egyptian culture celebrated it.   The Sabbath was completely foreign to Egyptians.
Thats  at least two, possibly three Commandments which are are directly opposed to Egyptian legal ideas.  Statistically twice the clear disagreement (20%) as seemingly direct agreement (10%).

And this is being generous in the use of statistics.
From the BoD viewpoint, only 1 match out of 29 crimes is a much lower agreement: (3.4%).  That is, while TC agrees with the BoD list for 10% of its own commandments, the BoD only agrees with TC for 3.4% of its crime list.


The other differences are just as serious.  The Egyptians appeared to have no 'core set' of values like the Hebrew Decalogue.   Instead, they had a complex and often arbitrary set of laws, enacted by Pharoahs and seemingly based on Egyptian religious values and social sensibilities, but unorganized or reasoned out by any unified worldview or legal philosophy.

But from early times, it appears that Hebrew culture embraced at least a legal awareness or core-value system, based on their careful preservation of early history in Genesis.

While Egyptians held core religious beliefs based on early history or myth (i.e., the afterlife and Osiris), they appear not to have based a legal code on their stories.

There seems no evidence that Hebrews borrowed their legal code from Egypt, although they may have been culturally influenced to a significant degree by their interaction, and service to the Egyptian state.

The similarities (e.g., prohibition of murder) can best be understood as universals that arose from situations common to all early peoples and hardly traceable to a specific culture or nation.