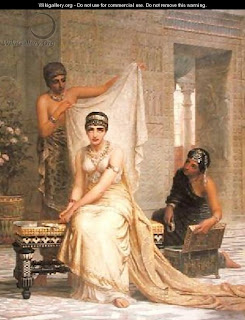 James Swan, in his defense of Martin Luther, makes the following point:


"Yet, Luther still translated it [Esther] and allowed it in his Bible."


Again however, the attitude of Luther is being minimized.
Although this is denied by apologists like James Swan,
Martin Luther did deliberately translate the Book of Esther in a biased fashion,
(into German), as well as add inappropriate commentary:


"In his translation of the book, he introduced anti-Semitic undertones, depicting Esther as the typical despicable Jew, eager to shed gentile blood. Luther advises the Christian not to enter into discussions with Jews, but to tell them:

"Do you know, Jew, that Jerusalem and your kingdom, together with the Temple and the priesthood, were destroyed over a thousand years ago?... The exile shows that G-d is not their G-d and they are not His people ... By the destruction of Jerusalem G-d, already showed that the merits of the Patriarchs did not save them." (Yehezkel Kaufman, "Goleh Venechar", Vol. 1, p. 299).

The main argument used by the Christian anti-Semites was that the exile is eternal. It should be noted that Luther did not understand the exact contents of the Book of Esther. Indeed, not all synagogue-goers understand that the decree of annihilation was not annulled, as Esther had requested. King Achashverosh did no more than write an edict, which he sealed with his ring, granting the Jews permission to defend themselves. In reality, a battle was fought between the Jews and their enemies. (The Scroll of Esther and Anti-Semitism
by Prof. H. Gavriyahu)

This shows that Luther had an agenda in his use of Esther.  He did not treat the book in a neutral fashion, with reverence as Holy Scripture, for he acted in an opportunist fashion in the translation and notes he provided.

It should be noted that Luther was not the only one who raised questions about the Canonicity and holiness of the Book of Esther.  The ancient Talmud itself, the oral tradition of the Rabbis, discusses the question of the status of Esther, Song of Songs, and Ecclesiastes.
But in this case, the discussion was somewhat moot, since the Jewish Canon had been settled long before the Rabbinical debates, probably before 200 B.C.

But it still must be asked, regarding Martin Luther, "Why Esther?"
The answer is probably in his intellectual approach to all Holy Scripture:  He was quite willing to challenge canonical NT books, such as James and Jude, although there is some suspicion that part of his motive here is his inability to reconcile the teaching of James with his own extremely exaggerated Pauline soteriology.  In the case of both James (Jacob to the 12 Tribes), and Jude, (Judah), his anti-Semitic bias may also be coloring his dislike for these books.  With a lower, more permissive treatment of the traditional Canon of both the Christians and the Jews, it is not surprising that Luther found himself free to criticize other O.T. books not in serious dispute by either Jews or Christians.

The book of Esther was a natural target to Luther in his later years, when he had become embittered against the Jews of Europe for not enthusiastically flocking to his plan of converting them to Lutheranism.