Links to Related Blogs and Sites

In case you got here through Google or some search engine, here are the links to the major sites and blogs:

Here are some other new Blog Sites we are experimenting with:

Some key components of a thorough examination here have been inadvertantly skipped.

Lets see if we can work them in:

(1) It is important to determine the probability as to whether it is an accidental variation, or a deliberate change. The reason is that certain “canons” (rules) of NT TC only apply to one type of Variation Unit (VU) or another. Without intelligent guidance, rules and “cases” can lead us astray. Thus we need “meta-rules” for the rules. One such “meta-rule” is to try to determine the basic category (Accident/Deliberate). On the one hand, accidents often leave naive evidence behind as to what happened, aiding in evaluating readings. On the other, deliberate changes can sometimes be explained, as you have above, treating this variant as a deliberate editing job.

In the above example, the problem is why or what occasioned the boldness of a copyist, or even an editor to dare to make the change? More is needed than just “perceived benefit”. A copyist must feel so compelled as to go against all his training and habit of accurate reproduction. Even an editor must feel a mandate or convincing authority to make a decision, like the choice between variants. The variants usually already have to be present. That one corrector chose one reading and another the opposite tells us nothing about how this likely scenario actually arose. It is perhaps less difficult for an editor to make a “conjectural emendation” but still very very difficult, when even a self-appointed mandate would normally be preservation of the original text.

The possible answer is ironically found in an ACCIDENTAL origin. suppose the original text was as you suggest:

Sans the later breathings, accents, and punctuation, it would have actually looked more like this:

A clear homoioteleuton drop out waiting to happen. After sleepy copyist A, the text looks like this:

Now copyist B reads it and thinks: “The case is definitely wrong. It doesn’t even match!” He adjusts what looks like an illiterate scribe’s gaffe, and voila:

The initial mistake gave occasion for the editors to jump into action. Now both readings become entrenched, because they are both possible and credible.

Other missing considerations could be discussed also.

For more on the controversial issues of NT TC, try our site here:
http://pa-john.freehostia.com/TEXT/Articles.html

In a recent exchange with Dr. Larry Hurtado (Edinb.U), I was corrected on some points regarding Roman Catholic involvement in textual criticism and potential bias.

"...your comment...contains a number of inaccuracies and could also be taken as gratuituously anti-Catholic in places. (I make no accusation; I only report likely impressions.)
Note for your information the following:
--The UBS/NA text is simply the successor edition to the Nestle text commenced over a century ago by a German Protestant, and still managed by the UBS and the NT text-critical institute in Muenster (a Protestant faculty). Martini was on the committee of an earlier edition but is no longer. When on the committee, he was a respected Catholic NT scholar, and he resigned when be was made a Cardinal. In any case, text-critical decisions are not denomination-based.
--The Lockam(Lockmann) Foundation is neither mysterious nor Catholic. I have no idea whether or why they might have been interested in other NT translations than the one they sponsored."


Of particular interest is Dr. Hurtado's assertion that "text-critical decisions are not denomination-based".

This is an interesting comment, because it appears that for at least a hundred years, active textual criticism, which promoted essentially the ideas of Lachmann, Tregelles, Tischendorf, Hort, Nestle, Aland were indeed driven by ideology in part, and most of the early textual critics who "dethroned the Textus Receptus (Traditional Greek NT text)" were in fact loudly opinionated Unitarians.

Later on the Unitarian/Trinitarian controversy died down, and textual critics became less interested in this doctrine when it became apparent to both sides that the textual evidence could not support a purely Unitarian NT, any more than it could a Trinitarian one.

But critics didn't on the whole move back into Trinitarian churches. The damage was done, and the many new Protestant "denominations" and cults continued along.

In large measure, the next generation of textual critics remained Rationalists and carried on treating the Bible as "any other book", subject to ordinary circumstance of wear, error, and worldly decay. On the whole, the doctrine of Providential Preservation of the Traditional text, (i.e., the 'Reformation Bible') was abandoned. It was granted that the original autographs were "error free" and "inspired" by most, but these of course were lost.

Yet in spite of the coming and going of various theological "fads", the textual data stayed about the same as it was in the turn of the century (c. 1900-1920). The papyri had all been discovered, and the only new items of interest were extra-biblical books like Thomas, Judas, & Nag Hammadi (gnostic and heretical works).

So the text languished in the state that the original Unitarians of the 19th century left it in. Even the latest critical Greek NT (1982) is essentially 80-90% in agreement with the Westcott/Hort text (1882).

We have been saddled with the "Unitarian" NT, and no one has any way of really escaping it, other than return to the traditional Text (TR/Majority text).

What is holding things up now?

Again the answer appears to be ideological, if not "denominational" per se. Of course no particular (Protestant) denomination controls things. But the fact is, there is a strong reason to maintain the text as it is, and not go back to the Traditional text. Its essentially the Roman Catholic text as well.

If modern Protestants have their Westcott/Hort style text taken away, there will be very little to distinguish Protestants and Catholics, other than Biblical interpretation, and some church service practices.

I would say that to put it bluntly, Protestant authorities are afraid to embrace the "Catholic" Bibles of their own Reformer-Fathers, and will not relinquish their claim to being "scientifically superior" in regard to the NT text in comparison to Catholics. 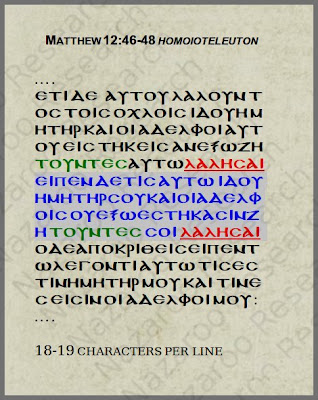 In a lot of ways, Matthew 12:46-48 is a textbook case of homoioteleuton (accidental line skip from similar endings). The picture gives an example of how the text may have been laid out in the master-copy where the opportunity arose for error while copying this copy.

In this case, we have duplicated part of a column in the format typical of 4th century uncials such as Codex Vaticanus (B), with about 18-22 letters per line, and justified on both sides of the column.

Its easy to see how such errors can arise: The copyist finishes the first line ending in red; he is still looking at his own copy. He has in memory the line he has just copied, and now glances back to the master-copy (pictured here). He hunts for the line, by scanning down the right side for the last word he has just copied. He thinks he finds the line, but it is a similar line further down. Now his eye moves to the next line after the second instance, and he continues copying.

If the text still makes sense after the loss of the intervening text, this error will may not get corrected on a first pass. The corrector has the same problem as the copyist, that is, keeping track of lines in the master-copy as he glances back and forth to the copy during the check.

Typically, scribes skip text about 4 to 10 times as often as they accidentally duplicate text (copying it twice). But doubled lines are also easier to spot, and correct. One need only draw a line through the extra text. It will be immediately apparent to the next reader what happened.

Repairing an omission is much more difficult, as one may have to erase several columns and re-write them smaller to fit in the text, if not noticed early enough in the copying process.
There are several factors then that cause omissions to be perpetuated, while additions usually never make it past one generation of copies.

Often, there are several ways the text could have been laid out to create an easy opportunity for
homoioteleuton. In the following picture, the same error could have been made copying a 'wide margin' master-copy in the style of Codex W: 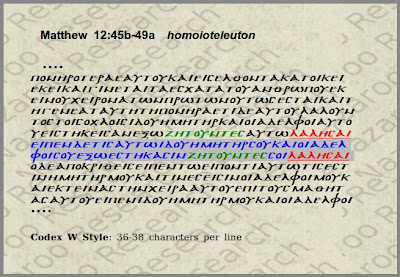 Essentially, any width of column where the intervening text forms some exact multiple of line numbers will cause the similar text to align. It doesn't even have to be at the end of the lines. The same error can arise (although perhaps less often from homoioarcton (skips from similar beginnings of lines).

Even a style like Codex Bezae, where the line endings are not right-justified, could still cause the same copying error: 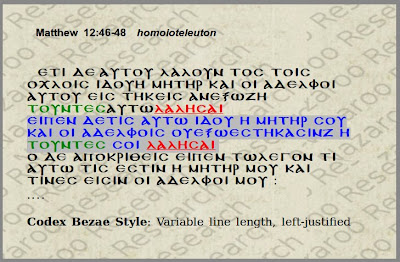 For more textual information on this Variation Unit, click below: