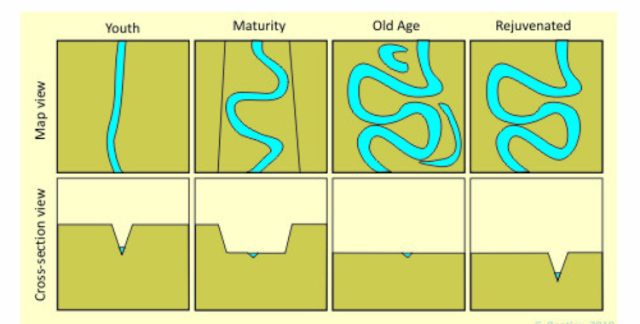 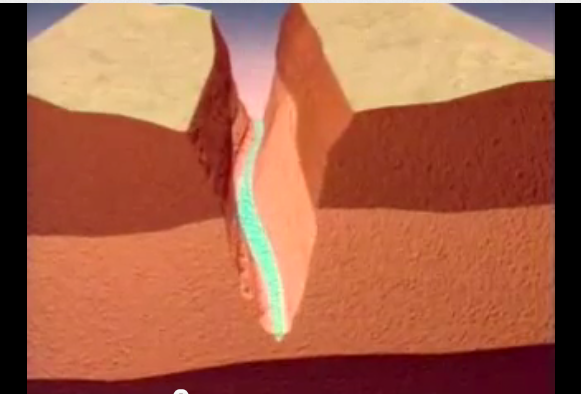 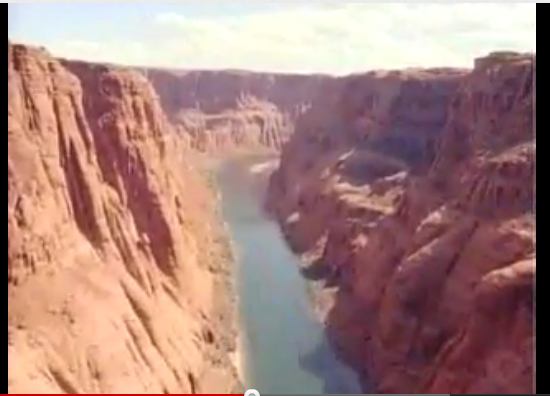 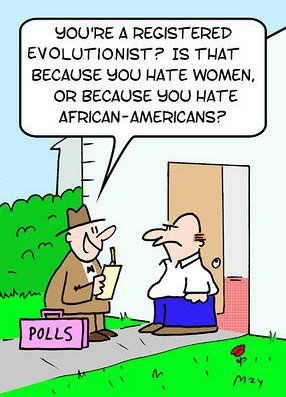 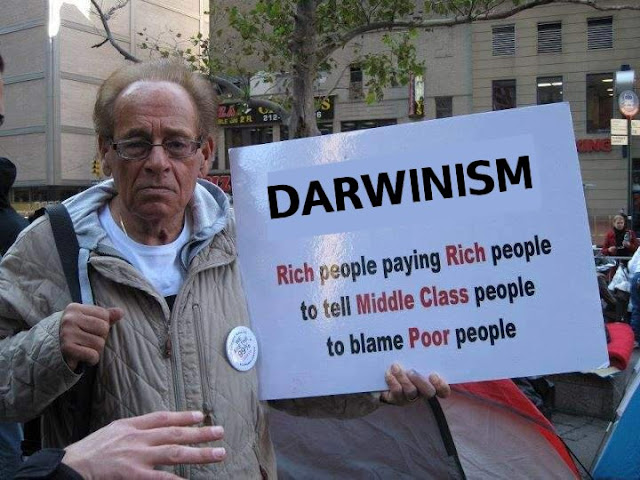 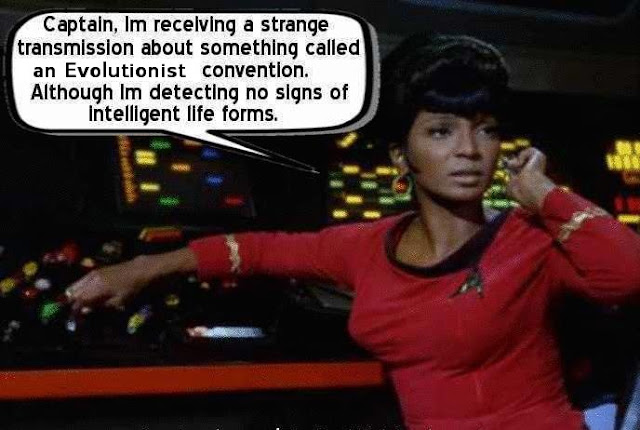 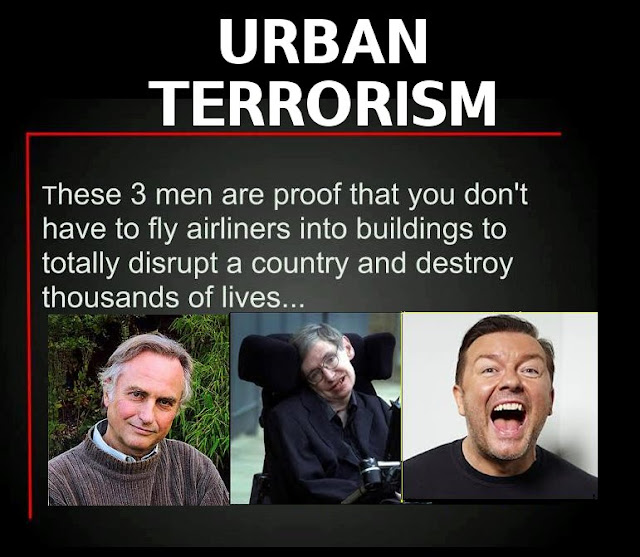 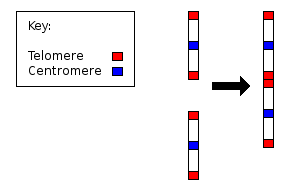 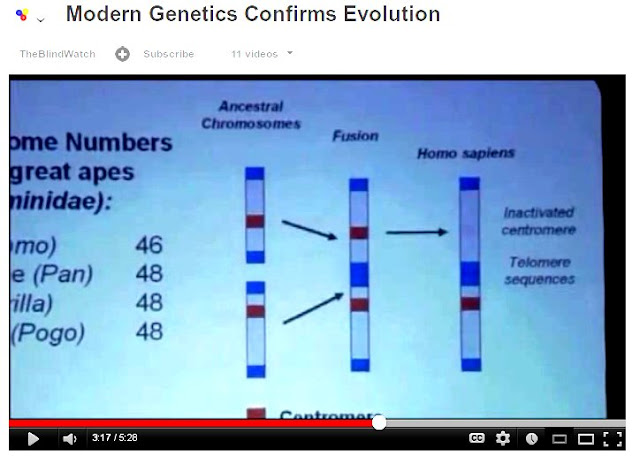 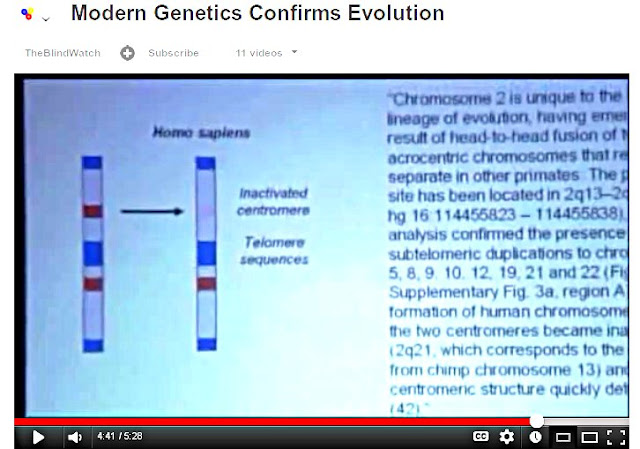 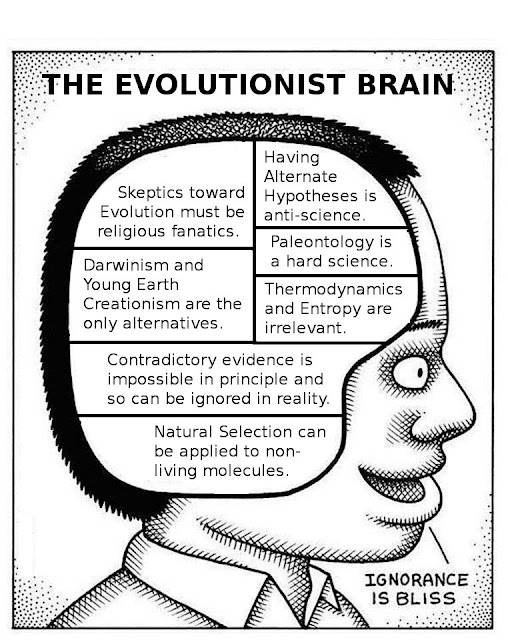 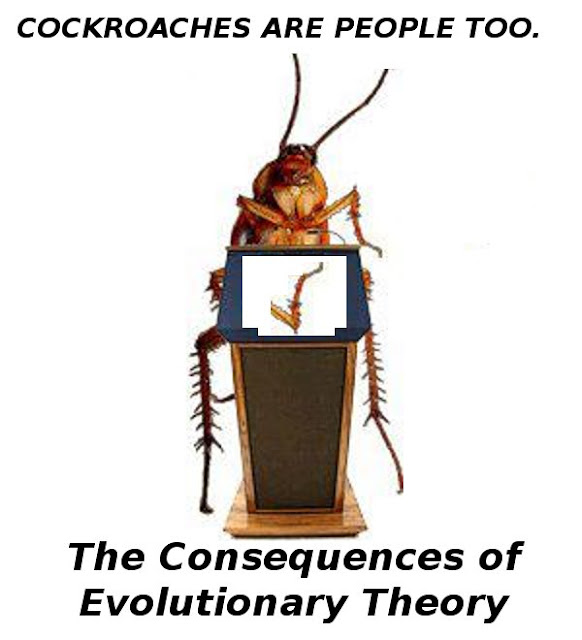 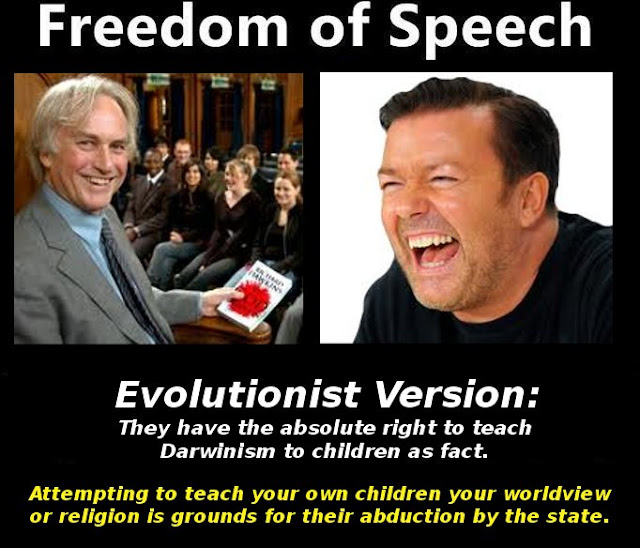 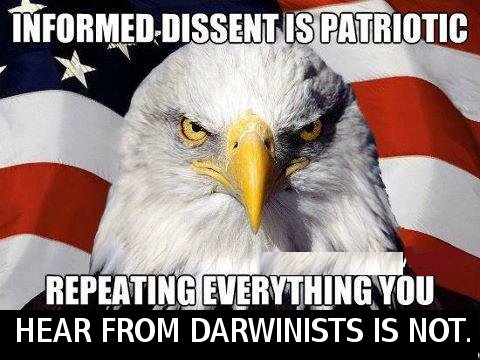 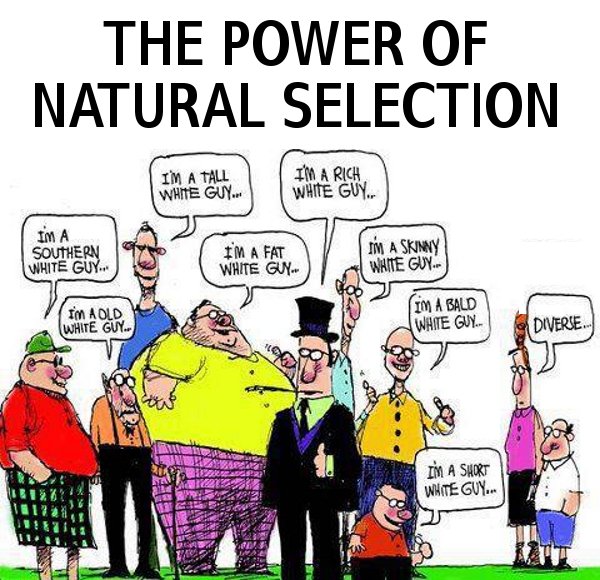 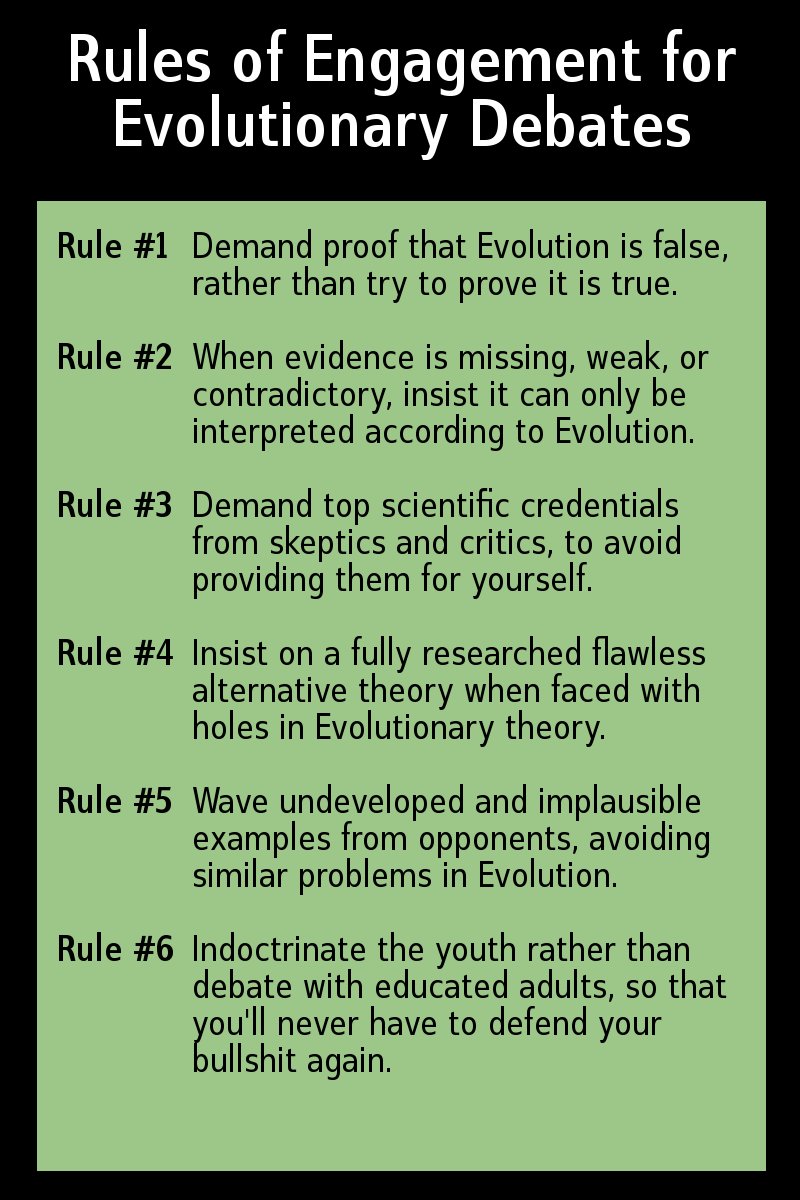 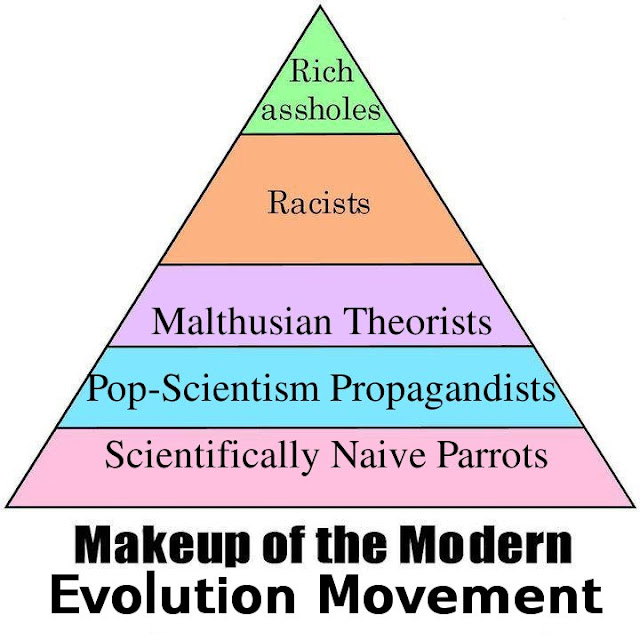 
The next step the narrator takes,
actually takes us right out of the realm of scientific investigation,
into the world of political posturing and nonsense. 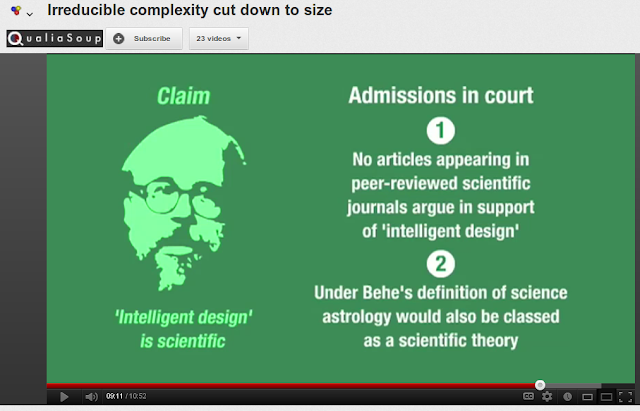 Of course when religious apologists,  New-Agers, Conspiracy Theorists (does anyone actually self-identify as this?), or Creationists, Intelligent-Design proponents, and Irreducible Complexity advocates dare to use the standard debating techniques, such as:

(1)  Ad Hominem - attacking the person who is the source of an idea.

(2)  Appeals to Numbers - suggesting that the majority is always right.

(3)  Appeal to Authority - what the experts / authorities say must be followed.

...whenever opponents use these popular tactics,
they are shot down mercilessly and exposed,
mainly because "such methods of winning arguments are unscientific."

Secondly, everybody who has ever had experience in a courtroom (in ANY country),
knows that courtrooms are literally full of lies, nonsense, injustice, and obfuscation.

Only a fool would today claim that "truth" is best resolved, or in fact resolved at all in a modern courtroom.   It matters not whether the case
is big or small, rich or poor, intelligent or moronic.

Courtrooms are of course run by lawyers, and without prejudice,
lawyers are human beings, most of whom are motivated mainly by money,
secondly by political passion, and perhaps as a limping third, justice and truth.
Or at least community justice, or perhaps pragmatism.

Yet when a court rules in favour of the cause of Evolution, we are suddenly
treated to the most amazing fairy-story of all:

Courts are now the "ultimate" arbiters of truth:
Perhaps even the best discoverers and establlishers of scientific truth. 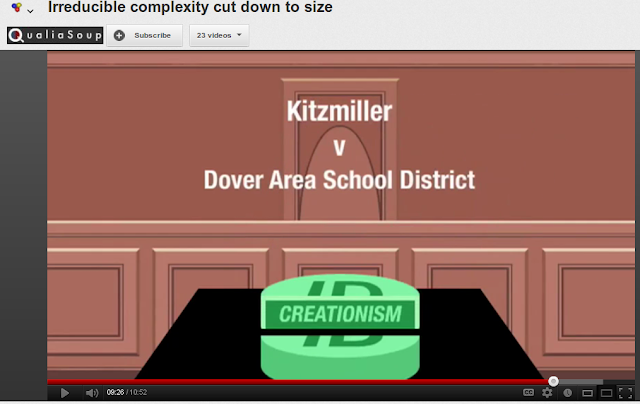 Suddenly, the lawyers have become our heroes, accurately dissecting the bitter pill of Intelligent Design, to discover the horror of Creationism,
masquerading as 'science' and daring to "infect our children".

If a person born anytime during the post-war baby-boom knows anything,
he knows this is pure horse-manure.

Next the video-maker runs through three examples used by Irreducible Complexity advocates;

(3) The Mouse-Trap example of Michael Behe.

We skip the bombadier Beetle example, because frankly, its nowhere near the required complexity in the first place, to qualify as an example.
In this the narrator is probably right, not about its evolution, which begs the question, but that its a FAIL as an example of Irreducible Complexity.

The Mouse-trap example is more interesting, but as far as we and the narrator are concerned, its not a living creature, and probably not an example of Irreducible Complexity either.

Nonetheless, without a perfect or complete scientific methodology, we can still be 99% sure that the mouse-trap was not a natural formation, but the result of an Intelligent Designer. There is little point in arguing about this.

We know the mouse-trap is a Designed Object for a number reasons, all of which can be scientifically investigated, analyzed, and expressed, provided we want to bother to put in the time.

Its not only 'complexity' that results in a good case for Intelligent Design, but a number of factors, including circumstantial evidence. For instance:

(1) The mouse-trap is made of iron wire, something we can already identify as man-made.

(2) It has a mechanical spring, the material, size and shape of which never occurs in the natural world, outside of man's activity.

(3) It has a logo painted on it, identifying the company and where it was made.

This brings up the problem of the huge hole in the video's narrative.
The narrator makes no proper distinction between Intelligent Design and Irreducible Complexity. He simply lumps everthing together under "Creationism", and labels that a 'religious ideology'.

He has no excuse, for later in the video he is quite careful about the definitions and philosophical implications of Irreducible Complexity.

Since he doesn't give Intelligent Design anywhere near the same care and attention, its obvious he's not being scientific, or even thorough:
He's being a propagandist.

Yet to any real scientist, the two ideas are quite clearly distinct,
and this distinction is crucial to fields such as cryptology and military surveillance.


The narrator makes an important point following the discussion of the mouse-trap here: 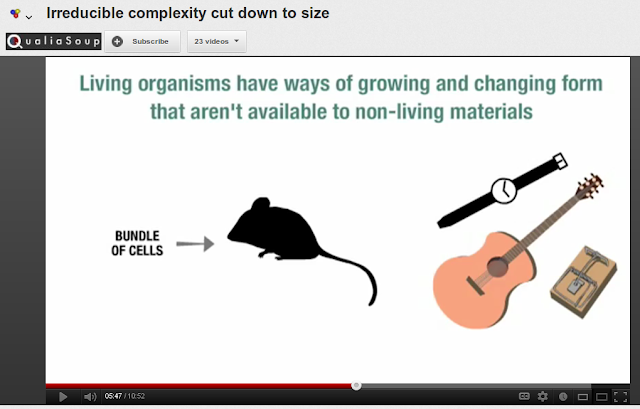 Thus the narrator is quite capable of making the crucially important distinction between LIVING things and NON-Living things.

But what is the real significance of this?

The whole original inquiry is based on this critical observation:

Its futile to insist that Living things follow the same physical and chemical laws as dead things, which is an underlying 'text' of atheistic evolution,
when the whole point of real science is to investigate why they DON'T.

To miss this is to misdirect what science actually is, and what the real business of scientific investigation should be.
Posted by Nazaroo at 9/03/2012 07:40:00 PM No comments:

Another remarkable thing about the video,
is that the narrator, after having made such a fuss about "quote-mining",
is absolutely adamant about his own quotation games.

He repeatedly "quotes" unknown, unidentified 'opponents',
but refuses to accept objections by posters that these are contrived,
or that he is himself engaging in "straw-man" arguments.

He explains that its okay for him to use "quote-marks",
because he is using them 'legally', as indicators of an idea unders discussion only: 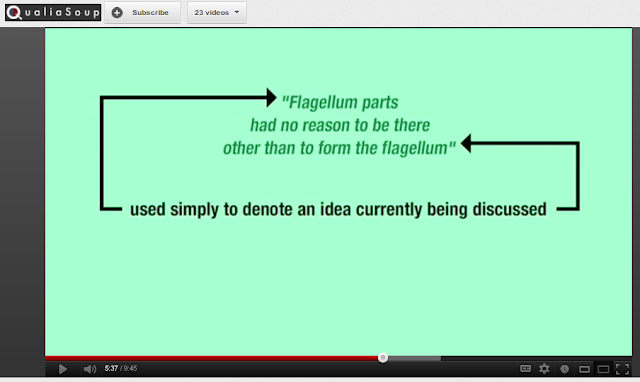 Of course few opponents (or even neutral parties) are going to buy this kind of obfuscation.
Anyone can make up "quotes", leave them vague and general, fail to identify where they came from,
and tar all opponents as if they themselves had said or would have said same.

Our biggest objection here however, isn't that the narrator is playing as many games
as any professional debater or snake-oil salesman,
but that we have been gypped again:

This isn't science, scientific method, or even "Evolution-Science".
This is debating about debating. The video-maker has really misled us,
and wasted precious time.

In both the original video, and in the subsequent "rebuttal",
he has literally spent most of his time wasting time on trivialities,
and debate-points, rather than on science.

We expected and wanted serious criticism of Intelligent Design,
and accurate discussion of the scientific methodology which would
settle the issues.

Instead we got more propaganda from the Evolution Propaganda people.

We asked for silver.
They showed us silver-plate.

Immediately after whining about Darwin misquotes,
the narrator plunges into a sketch of how the eye could have evolved.
Naturally its vague, dubious, and oversimplified.

His main point (in order to support Darwin's original conjecture),
is that the eye, with its complex parts could have evolved in stages,
as each smaller advance gave the creature better survival and reproductive chances in a process of Natural Selection.

His attitude is that this sketchy sketch is more than enough to "refute" opponents,
and silence Darwin's critics regarding the plausibility of "eye-evolution".

Of particular interest is his illustration of at least four of perhaps six 'main steps' in a gradual evolution process:

(1) A proto-eye, consisting of a simple patch of light-sensitive cells

In support of his thesis, he points to species of animals in each of these stages of 'development': 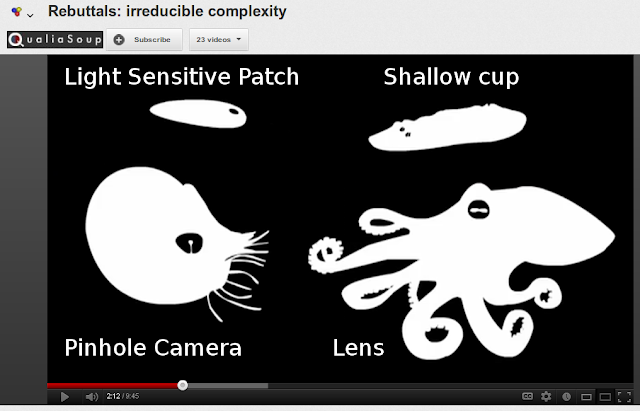 Of course several issues, difficulties, objections can be made in opposition to this hypothesis.

(1) These modern creatures certainly didn't literally evolve from one another. Each must be a speciating branch of an evolutionary tree. What was the real multi-stage process of "eye-evolution"?

(2) Why are some species apparently back at the very beginning of biological time in their (arrested) development, while others (mammals etc.) have the most advanced optical systems?

(3) What possible processes could have created the Information System which is fundamental to the complex optical systems of higher animals?


The narrator objects that critics and opponents demand too much from the hypothesis. That the model is by nature a mere sketch, lacking in the rich detail of the historical reality: 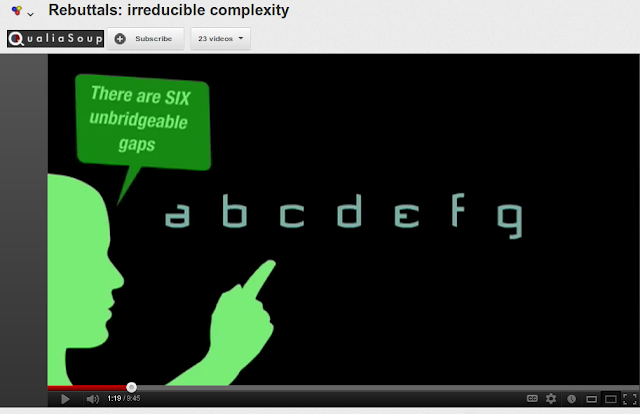 He complains that it is a "no win" situation, since for every 'missing-link' provided,
there will be another 'gap' to explain, between the new steps in the step-list.
Like the famous puzzle of Hercules and the many-headed hydra,
its an impossible task, if two heads grow back for every one cut off.

We can allow for and somewhat sympathize for the video-maker's plight:
A theory of this kind must necessarily start sketchy, and be filled in with
extended efforts of scientific investigation.

But the real point is that again the Evolutionist protests too much.
Don't bewail and lament because a sketch isn't a theory at all, perhaps not even a hypothesis,
and then turn around and claim its not only 'plausible' but somehow must be true.

Its just sketch. A child's drawing; the beginning of a hunch, a hypothesis.
Its not a convincing scientific theory, and it should never be presented as such.

Worse than all this, the narrator continues to beg the question:
Whether the eye evolved or not is the issue of contention.
Its not an assumption or axiom, either in the case of advanced optical systems,
or even in the simplest of light-sensitive structures.
Any or all of these devices could be pre-coded in genetic information,
or simply created in a lab.

Irreducible Complexity (IC) suggests that certain cases of objects or systems of extreme complexity could not have spontaneously happened, because natural events are not truly random, but follow specific statistical and physical laws. These laws preclude their initial assembly by mere accident, because the steps are sufficiently long and complex, and the environments so delicate and unlikely, that the objects/systems must have been forced into existence by deliberate intent. Sentient and directed willpower is the simplest alternate explanation and most likely force to have made the environments and carried out the steps to create those objects (highly complex systems) .

Here is a very good video response to this subject of "irreducible complexity":
http://www.youtube.com/watch?v=W96AJ0ChboU


This is an interesting video.
However its not a scientific argument against Irreducible Complexity.

The very opening gives us a good idea what we can expect in what follows.

0:00 - 1:20 min, The 'reasonable' sounding narrator with the English accent begins with a complaint against opponents about "quote-mining", although as expected, he names no offenders.

Apparently these unknown "quote-miners" misuse Darwin, because they quote his remarks about the apparent absurdity of an EYE evolving, out of context, and without qualifying statements.. 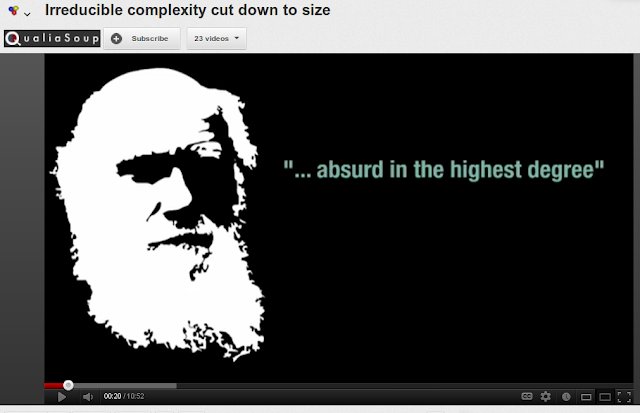 We will take the narrator's word for it that he himself has provided adequate context: 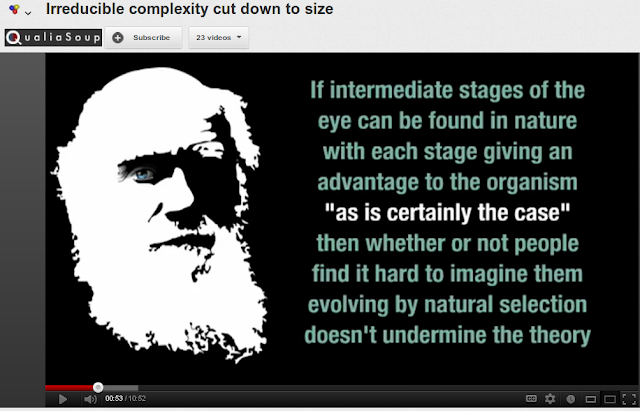 The above shows Darwin did believe the eye evolved (obviously).
The last quote however, is not as unambiguous as the narrator would like: 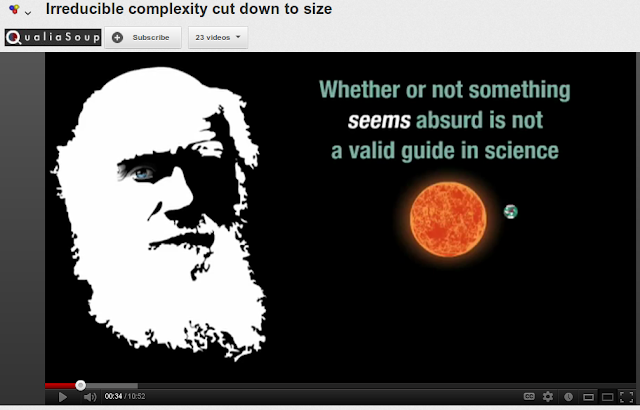 First of all, it does seem rather clear that Darwin here concedes that
the 'evolution of an eye' does at least appear absurd, and since he is
addressing fellow-scientists, including brilliant physicists who opposed him,
it can't be portrayed as "stupid" or "ignorant" to have a healthy skepticism,
when it comes to the evolution of complex organs like the eye.

If healthy skepticism by other scientists weren't normal,
the narrator would not be making a useful point at all.
That is, if only stupid or uneducated or non-scientific people
doubted the evolution of the eye, or such opinions only were tenable
100 years ago, then how can this last statement have much meaning today?

Yet the narrator goes out of his way, not only to emphasize this point,
but repeats it twice more in this video, and uses the quote again,
as an apt summary of all objections to apparently implausible evolutionary conjectures or specific sequences. 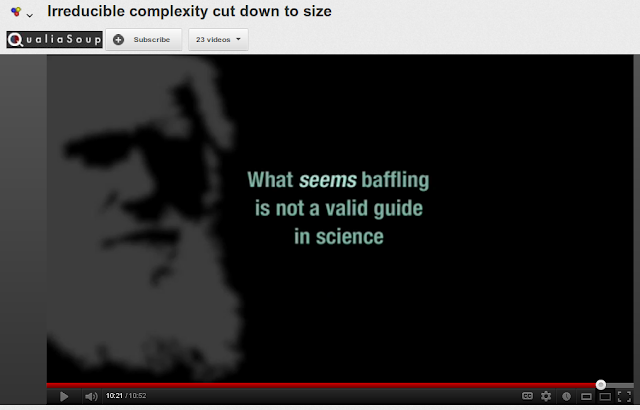 If this statement is to carry the seriousness and profundity with which
the narrator intends it to hold, then by obvious inference,
its quite reasonable to be skeptical, not only of the 'evolution' of complex organs like the eye,
but also of any vague, suspicious, or implausible reconstruction,
including the whole general theory.

And this is quite a sensible position, because the very nature of real science
demands that we be skeptical of our current knowledge, in order to
effectively search for new knowledge.
Posted by Nazaroo at 9/03/2012 07:28:00 PM No comments: