Recently Chloroform tried to sell the RC version of the Eucharist here,
in post #18 of another thread.

I've decided to examine in detail the claimed Roman Catholic view,
and show exactly why it is both a nonsensical fantasy of magical thinking,
and a complete failure as an attempt to explain irrational behaviour
or convert anyone to Roman Catholicism on this particular doctrinal issue.

The first thing we will presume, quite fairly I think,
is that Fluffoform's website does indeed substantially and thoroughly
represent the Roman Catholic view, being based on RC sources,
and granting that Roman Catholics have had nearly 1400 years to
fine-tune and complete their articulation and defence of their
peculiarly nuanced view.

I will ask idiots and other Roman Catholics to refrain from replying here,
until I have posted the basic outline of failure to assist RCs in discovering
why their religious nonsense is both a lie, and utterly unconvincing to
people with an IQ over 80.
First off, we turn to the Catholic Webpage, and find there an outline of their
explanation/defense:


Apparently, in an attempt to appeal to nominal Protestants,
the RC page first tries to lay out an argument/analogy/framework
using Holy Scripture as the basis.

Then it adds a section excerpting early Christian (RC) writers
who are imagined to have some authority, at least for representing
what presumably Roman Catholics believed or what authorities taught
about the Eucharist at various times.

This last section is at best secondary and incidental to the main point,
since if apologists can't explain the Eucharist using Holy Scripture,
then it matters not what or how many semi-literate clowns from the Middle Ages
thought this or that about it.

At least the authors of the webpage do seem to have an inkling that
only Holy Scripture will have any weight with Protestants when defending
or selling the Roman Catholic Eucharist.

This is more than Crucifuzz seems to grasp in regard to this problem
of credibility and success in teaching and convincing both opponents and
third parties unfamiliar with the discussion at hand.


Why would technical aspects of this ritual be of any importance whatever?

The first claim is that there is a real change of the bread and wine in the ritual
so that it becomes the flesh and blood of Jesus the Christ.

It is not the transubstantiation per se that really matters to the RC authorities.

It really doesn't make any difference whether God magically changes
bread and wine into flesh and blood, manna, or delicious Lucky Charms.

The point for the Roman Catholic Denomination is that God only does this
when bona fide "priests" of their religion pray and perform the ritual.

And secondly, the participation in this "meal", which can be WITHHELD
from non-Christians, church-members in bad standing, is supposed to be
a necessary or mandatory 'sacrament', which is something between
a privilege and a religious duty to perform (i.e., participate in while alive).

In some sense, Roman Catholics claim it is a necessary component of
forgiveness and salvation, and a sign of belonging to the 'saved' or
'true church'.

And since this 'meal' is regulated and controlled by the elite 'priesthood'
of duly ordained Roman Catholic priests, they claim to have in their power,
through this ritual control over who is and who isn't, a bona fide saved
Christian in good standing in a visible Earthly Church defined and identified
as themselves (i.e., the Roman Catholic denomination).


So to sum up, Roman Catholic priests claim to be an elite class of Christians,
distinguished in part by their authority and power to perform a "mass",
which is a ritual meal, which in answer to their unique prayers,
is changed from ordinary bread and wine,
into the flesh and blood of Jesus the Christ.

And they would further claim that to be a bona fide Christian,
one must participate in this mysterious spiritual cannibalism,
and do it only under the supervision of this elite class of power brokers
called priests.

It must be further observed that the Roman Catholic priests do not claim
that there will be any 'visible' or verifiable sign of this 'spiritual change',
and acknowledge that the bread and wine in the ceremony look, act and
taste exactly the same as the bread and wine they certainly were, before the ritual.

Thus there is no visible or scientifically measurable change in the bread and wine.

We are to believe some invisible mysterious change, magically occurs,
during the 'mass' in response to the prayers of the priest,
which is nontheless "real" and "literal" in some substantial sense,
only without any detectable effect.

The effect claimed, is entirely spiritual, and without any necessary physical evidence,
and so at once we cannot talk of a physical claim in the chemical or Newtonian sense.

Another aspect of this claim is one of status and apparent substance,
in that Roman Catholic priests say they are priests performing a sacrifice:

It is not a mere memorial, nor a re-enactment or a nmemonic aid to worship.

Somehow Jesus again, and repeatedly pours out his 'self-sacrifice' in this ritual.
Again, it is not a mere re-enactment for Jesus either, but a 'new miracle',
a mystery in which people are concurrently forgiven and blessed,
and somehow in the present actively participate in a 'cloning' or 'action'
which took place 2000 years ago, but is again acting in the here and now,
through this 'mystery ritual' or 'sacrificial meal'.

Given the rapid changes in the world stage and recent events,
it has become clear that more literal interpretations of Revelation
have become much more plausible and credible than in the more recent past.

Many Christian groups, both Protestant and Catholic are struggling to
find authentic and appropriate interpretations and applications of the many
scenarios found in the Book of Revelation.

The Seven Trumpets are one group of such prophetic scenes,
which now more than any other time in history offer themselves
as literal and immediate future events.

Lets have a look at some of the Trumpet Prophecies:

For convenience we here take a few screenshots of a recent Youtube on this:

Well the first trumpet offers a simple and straightforward literal interpretation.
Lightning is a phenomenon most people are familiar with.   The "red hail" is a little more obscure, but could be a combination of small meteorite showers or
some secondary phenomenon caused by the first.

It should be remembered that ordinary lightning is a local phenomenon, but reasonably understood as electrical discharging or exchange of high volumes of electric current across the sky and between the atmosphere and ground.

To occur on a global scale, we would expect some scientific cause such as
an over-charging of the magnetosphere and/or atmosphere as a result of
a radical change in either the Solar Wind or our own magnetic poles,
which are responsible for the support of the Magnetosphere.

The Magnetosphere normally protects the earth from both the Sun's radiation
(Solar Wind) and also the bulk of cosmic radiation.   If our magnetic poles,
and also our Magnetosphere were to collapse or be drastically altered,
a scenario where vast amounts of electical energy are released from the sky
onto the earth is quite plausible.

The Northern Lights are an already well known cause of smaller imbalances
in our Magnetosphere and the resultant coronal discharges of ions and energy.

If vast amounts of electro-magnetic energy are released, any number of
other secondary atmospheric effects could be possible, accounting for
things like 'red hail' etc. 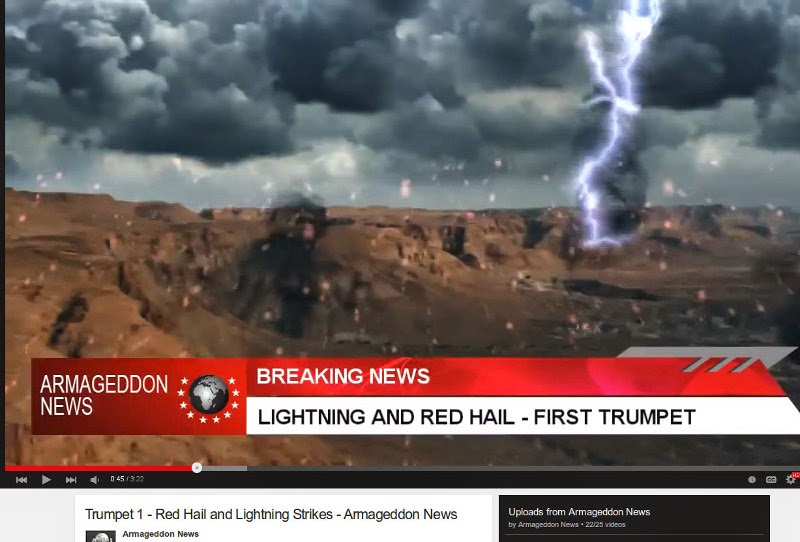 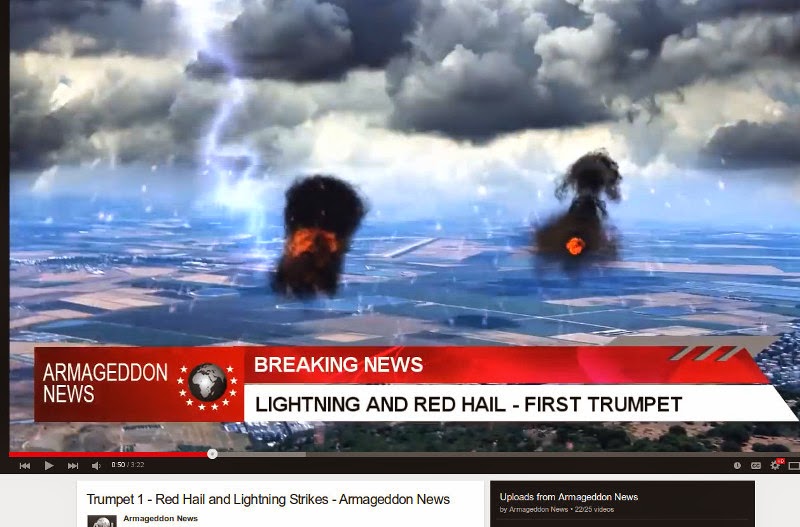 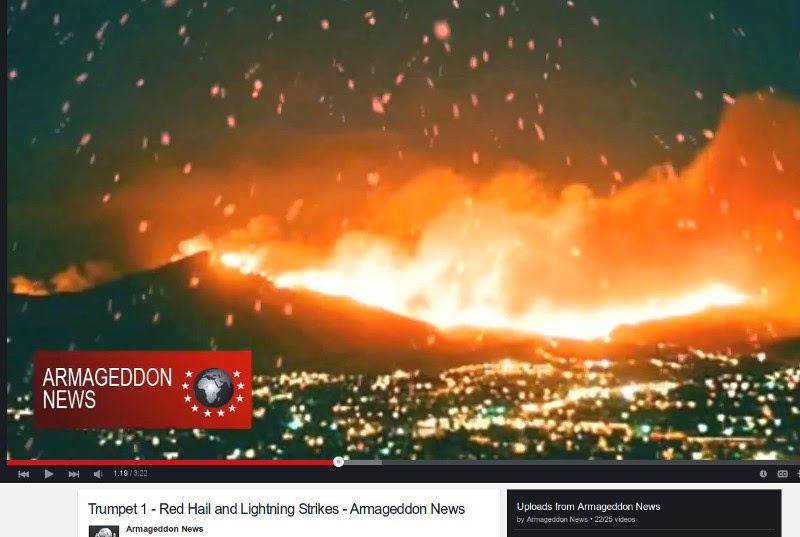 
Trumpet 2 is more interesting, and we now have much more geophysical
background knowledge to explain events like this.

Small volcanoes are plentiful around the globe, especially along
tectonic plate fault-lines and areas of 'plate subduction',
but are also found as 'punch-throughs' in the middle of large unbroken
plate pieces, and they can happen anywhere.

Likewise, there are ancient legends already,
such as Atlantis , in which whole cities (mountains) and/or even islands
have vanished under the sea, probably accompanied by volcanic action.

That is not to say however, that we haven't had local mini-versions of
this phenomenon, such as Krakatoa (1883) and more recently Mt. St. Helens (1983). Lets look at Krakatoa.  It is doubly significant, because it is not only
a very close case to a mountain collapsing into the sea, but its date is also
unusual, as well as the sheer size of this catastrophe:

'The 1883 eruption of Krakatoa in the Dutch East Indies (now Indonesia) began on August 26, 1883 (with origins as early as May of that year) and culminated with several destructive eruptions of the remaining caldera. On August 27, two thirds of Krakatoa collapsed in a chain of titanic explosions, destroying most of the island and its surrounding archipelago. Additional alleged seismic activity continued to be reported until February 1884, though reports of those after October 1883 were later dismissed by Rogier Verbeek's investigation. It was one of the deadliest and most destructive volcanic events in recorded history, with at least 36,417 deaths being attributed to the eruption itself and the tsunamis it created. Significant additional effects were also felt around the world.'


(The date is also significant, as it was just after the release-date of the mutilated "Revised Version" of the New Testament, which attempted to delete some 200 whole and half-verses from the Bible, and thankfully was rejected by Christians throughout the British Commonwealth, in favour of the traditional King James Version.) 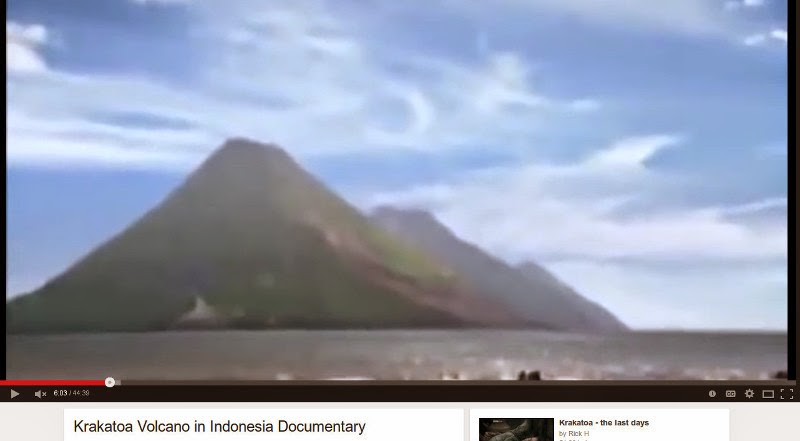 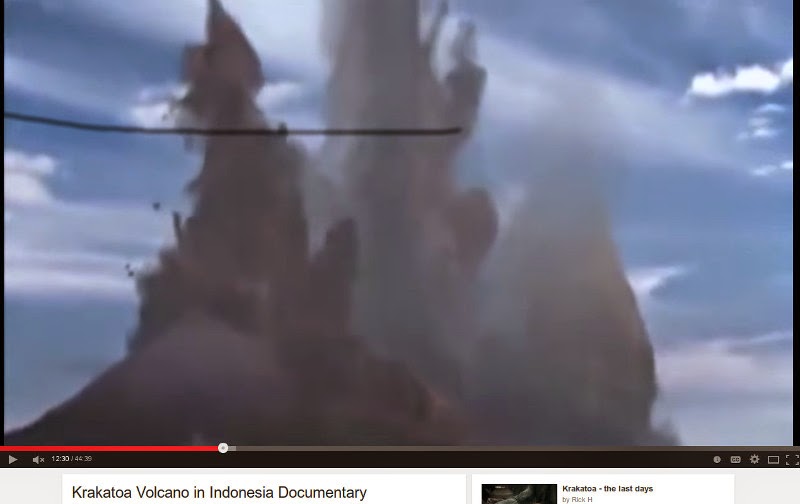 We are also 'lucky' in the sense that the recent invention of photography allowed for the capture of some of this incredible historical eruption on film. 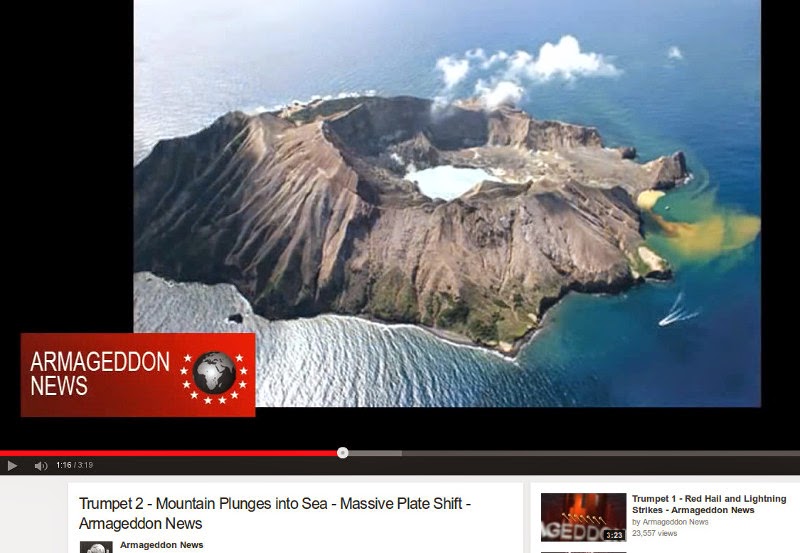 What Krakatoa shows, is that indeed, mountains and islands CAN collapse
and fall into the sea. 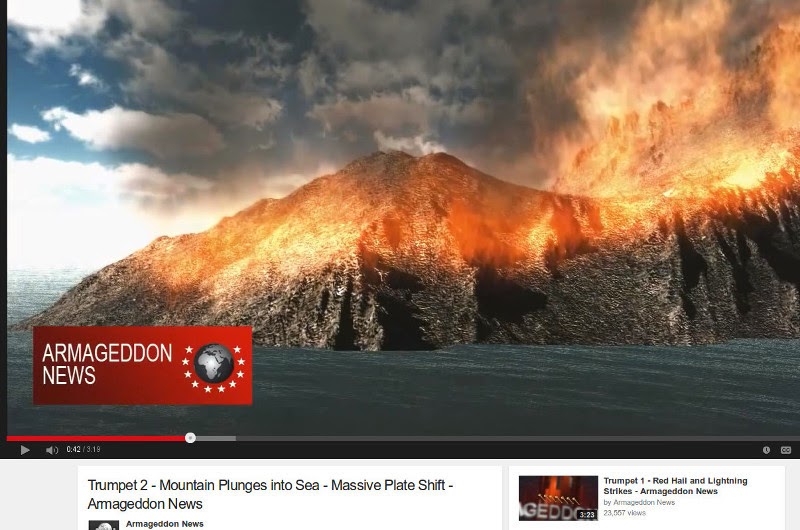 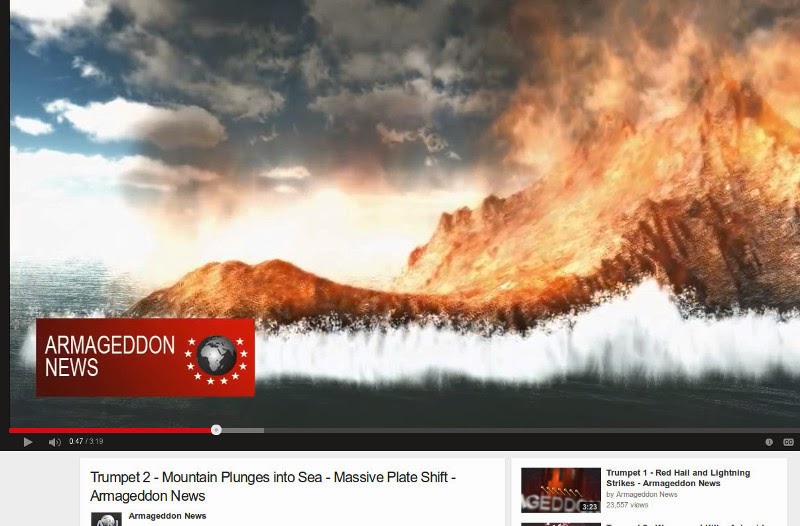 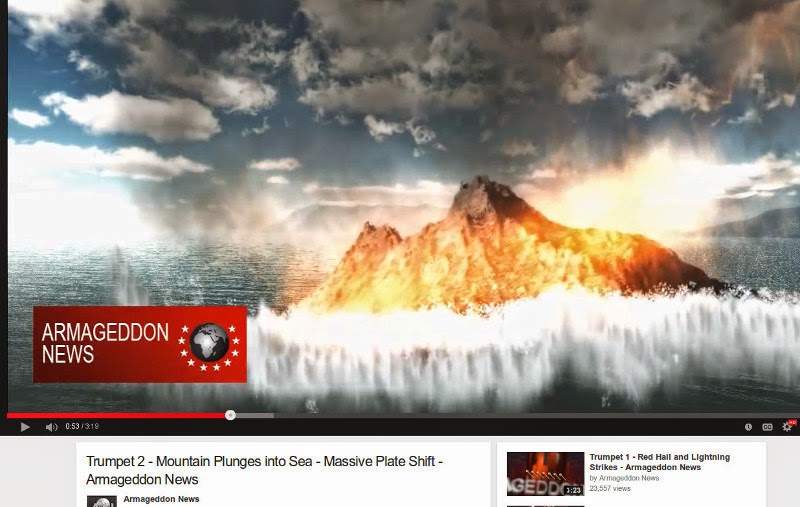 Our next question of course, is where might this horrific prophecy take place,
in order to destroy 1/3 of life in the seas?

Two very obvious and plausible places are Japan, and California/Yellowstone.

Japan is placed right on the "Rim of Fire" and is historically suffered from
many earthquakes, volcanoes and tsunamis over a long period.

California is on a known massive fault-line, and right next to the
infamous Yellowstone Cauldera, which is believed to be due for an eruption.
The size of the eruption of Yellowstone is estimated to be 1000 times as large
as that of Mount St. Helens.

If this region were to blow, we might expect large portions of California coast
to slide into the Sea.

The major collapse of these regions on either side of the Pacific,
or even both of them together, could conceivably kill 1/3 of life in the ocean.

TWO BEASTS in Revelation 13 - A Solution to Controversy

Protestants in the West have historically been Eurocentric in interpreting the Book of Revelation. 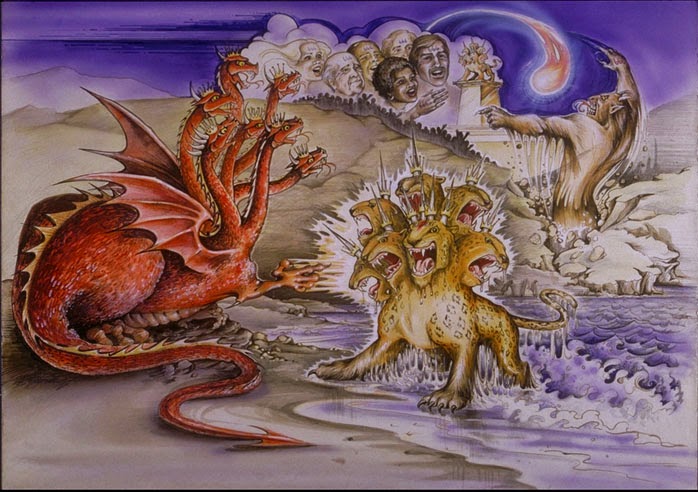 The Roman Catholics have favored a 'preterist interpretation' which is essentially either historic (fulfilled in the past) or allegorical (spiritual meanings).

The Protestants have tended to stick to literal interpretations, but have focussed on the Vatican or Roman Catholicism as the Anti-Christ.   For the last hundred years or so, the Middle East itself was either forgotten, downplayed or separated out as historical prophecy for the pre-Christian era.

Relatively recently however, Western Protestant Christians have had to recognize the literal fulfillment of some astounding prophecies, such as the re-establishment of a modern State of Israel, and the revival of radical Islam.

The solution to the new dilemma may be found in the previously unnoticed mention of TWO beasts in Revelation chapter 13.

First the Protestant take on the Vatican:

Now a Middle-Eastern view of the End Times: