Those who wish to read the previous article are warned that it necessarily contains graphic content and disgusting materials which are being passed off as "sex education" for children and teenagers, as young as Grade 5, in Canada.

The pamphlet was confiscated from my daughter who received it from a lesbian teacher at her public school when she was only 10 years old.

Nonetheless it was a government sponsored and Education Ministry approved pamphlet which was distributed to children behind their parents' backs. 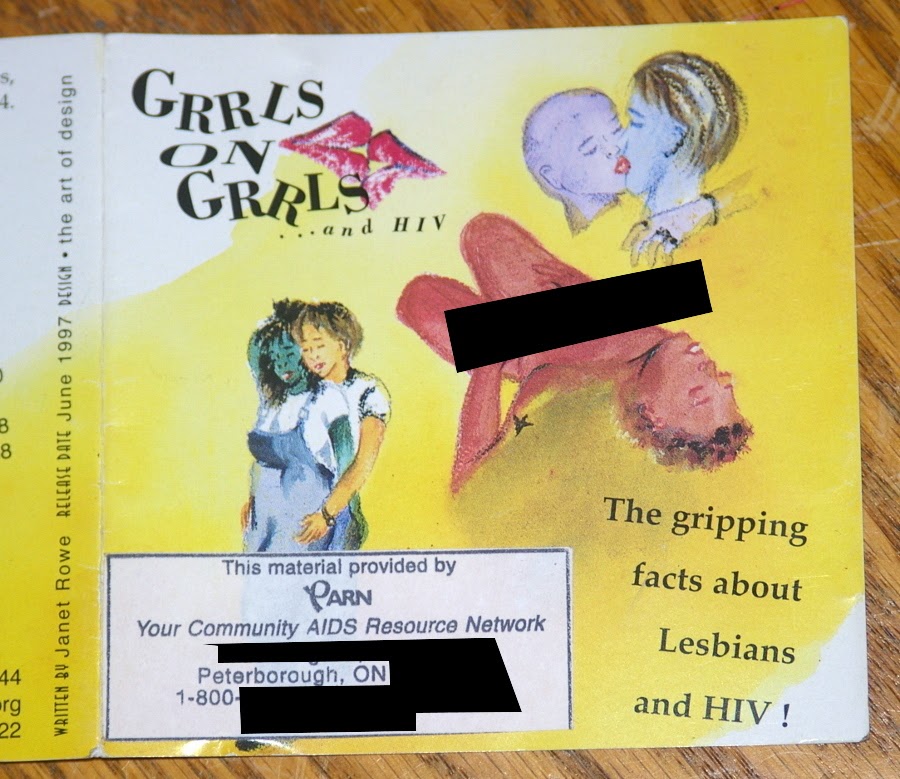 Those parents who care about these issues are strongly recommended to review the previous article, even though it contains what most Christians would classify as disgusting trash, wholly inappropriate for children.

What Lesbian/Gays are Teaching Your Children Behind Your Back

Here is an actual pamphlet which was and is being distributed in public schools and High Schools in Ontario, and which has the support of both the educational authorities (teachers) and the government (Our Lesbian Premier):

This pamphlet was confiscated from my daughter, who received it from her lesbian teacher at the Ontario public school where she attended.


It was purported to be candid education on sex, with recommendations,
safety advice, and support phone numbers that can be called behind parents' backs,
whereby confused kids and preteens can get 'quality' advice from
so-called 'experts' who will of course be non-judgemental and confidential
regarding whatever your child wants to learn about. 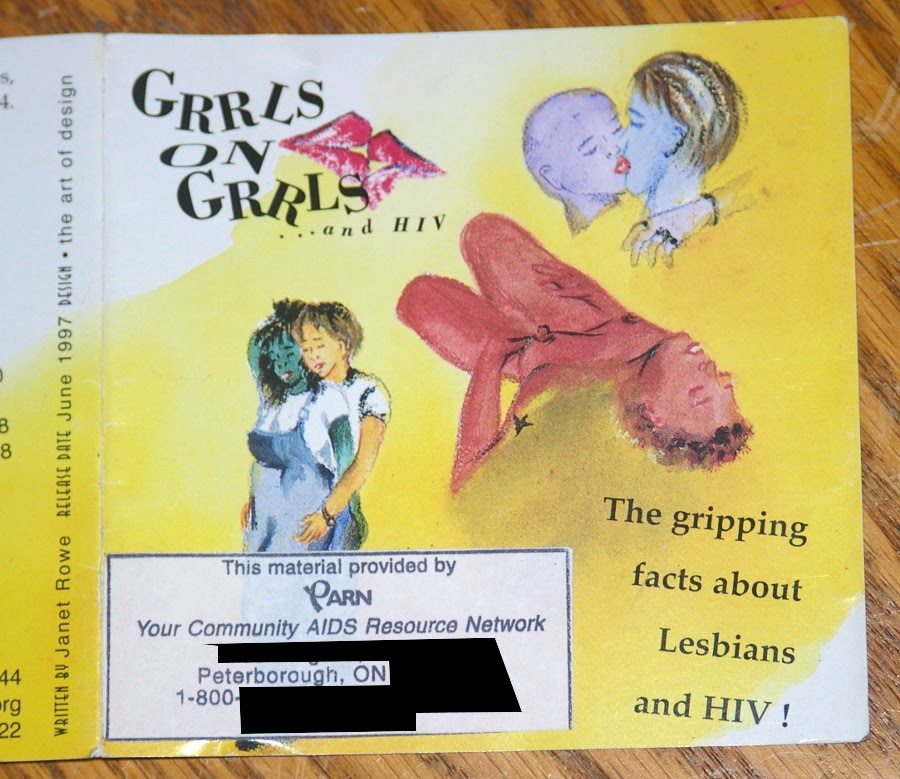 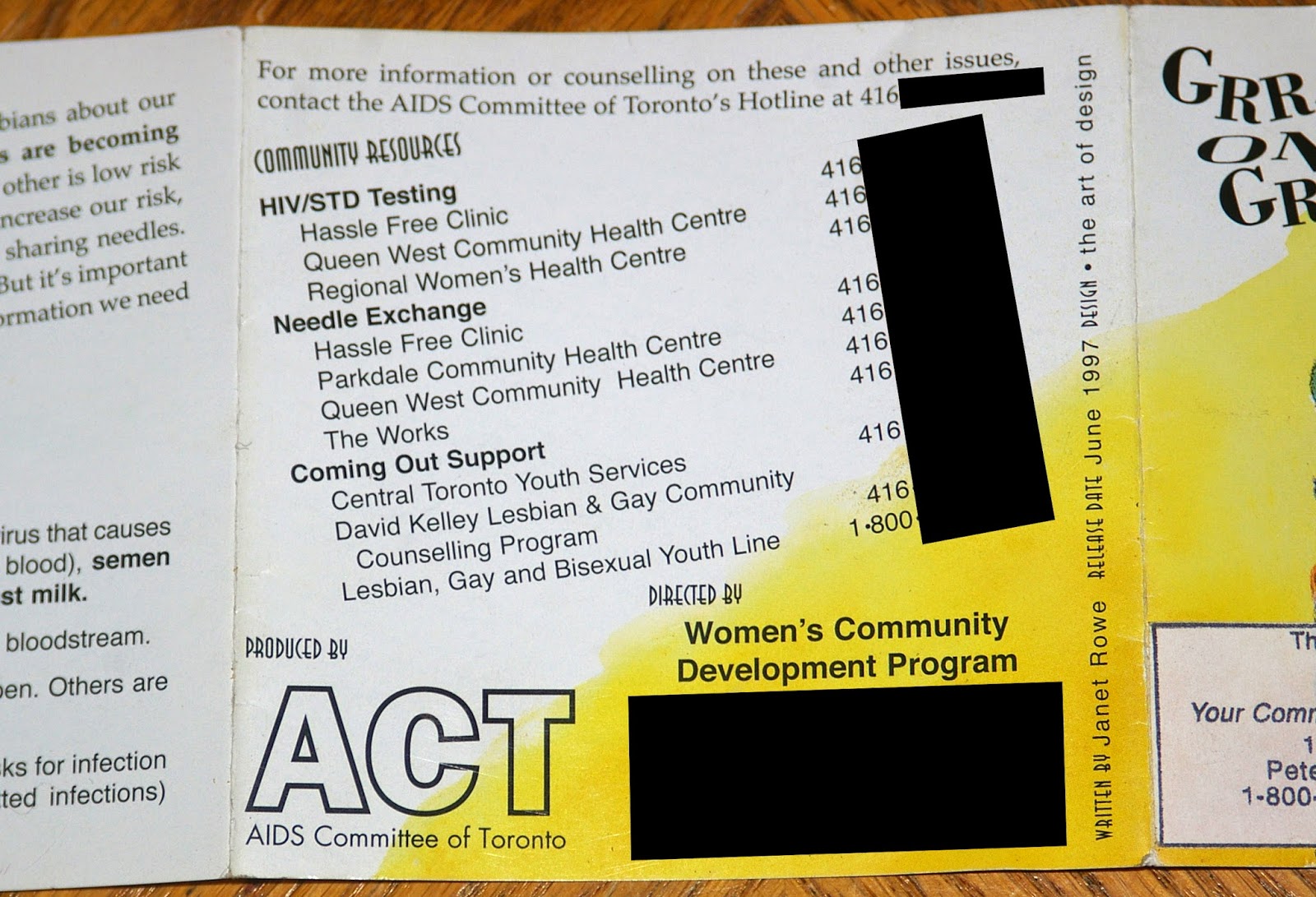 What you will see here is VERY explicit and shocking, especially in the context of strangers providing private phone numbers so that they can have secret conversations with your children, with no accountability, but with however, government funding.

The pamphlet plunges right in, inviting the unwary to just open it right up.

Here are the inside sections in order left to right, with the back-side to follow: 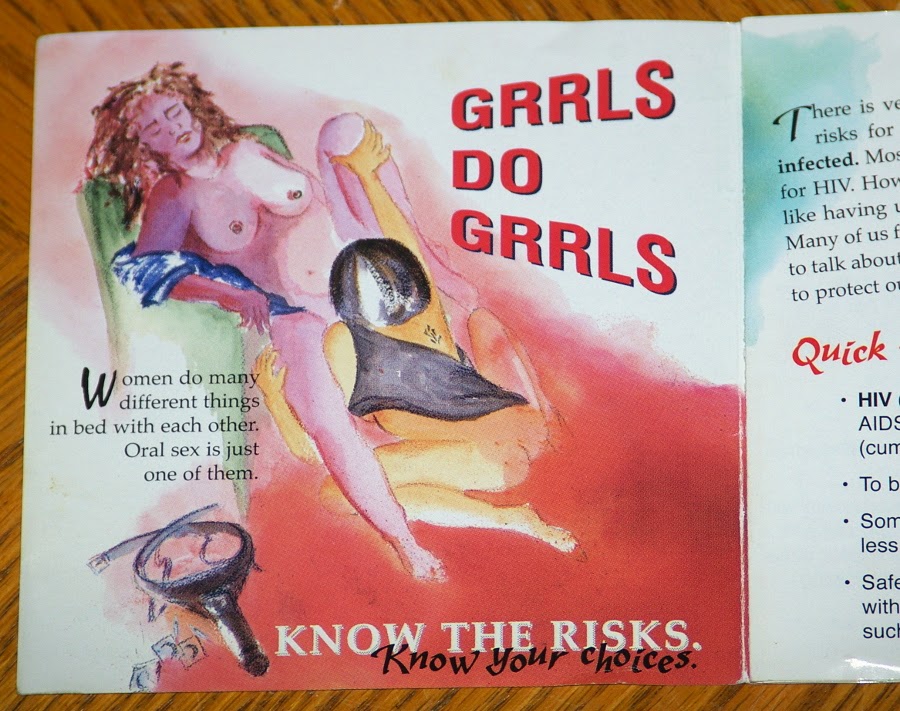 Yes.  According to the fairy-story narrative of the Lesbian Radical Left,
...women do all kinds of things to each other, and your daughter is missing out.

At 12 to 15, she needs to know the full array of "choices" available to wymin.
Lesbian Alliance to the rescue!

And yes:  thats a picture of oral sex, a big black strap-on, and condoms.
No worries.  The Hotline will be glad to explain. 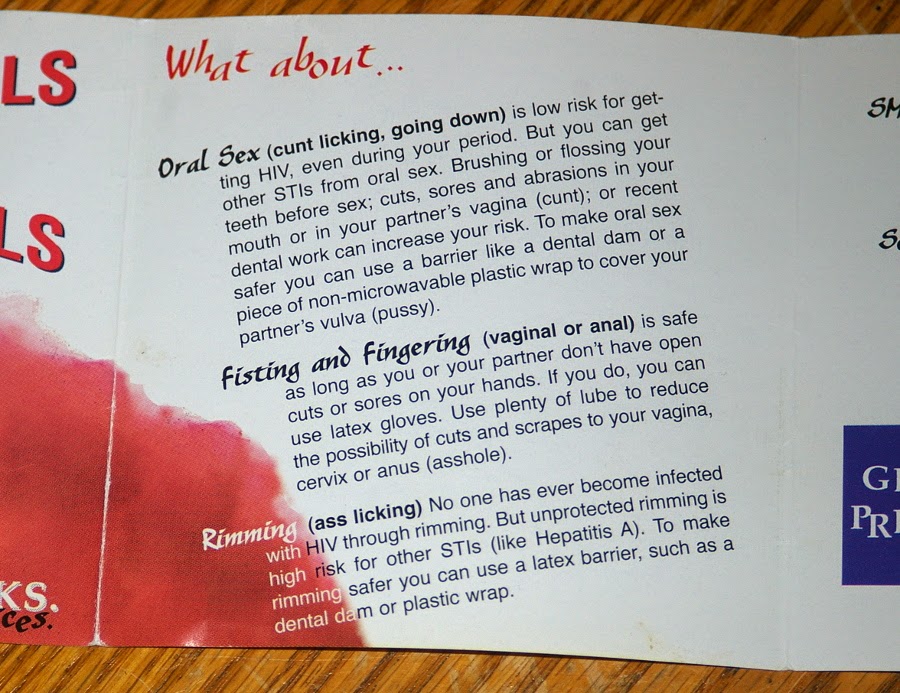 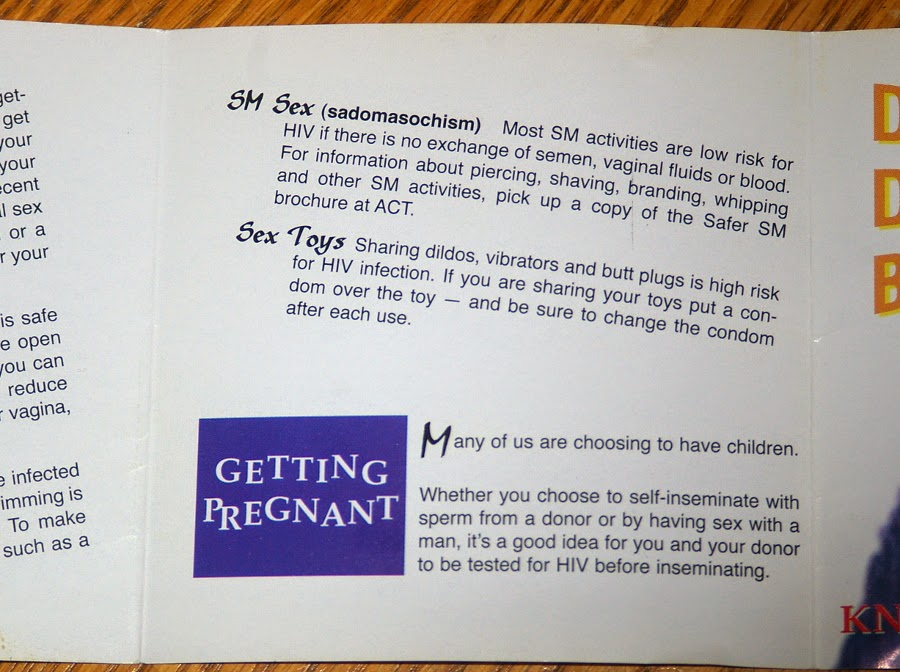 Sado-Masochism is mostly safe too (like being mostly pregnant?).  and if you are interested in piercing, shaving, branding(!) whipping and other SM activities, 'we'll provide you with brochures!'

Again, don't forget that magical condoms make even the riskiest behaviour safe.
Don't forget to change those condoms - they're magic!.

"Many of us are choosing to have children."

You can clearly make the deduction these lesbians mean other peoples' children,
first and foremost.  And hey, it the sex doesn't work out, they're ready to adopt any children that can be confiscated from poor people on trumped up allegations by their friends in the CAS.

Don't miss the strange connection between SM and collecting children on the same page, for a footnote on where the author's mind wanders. 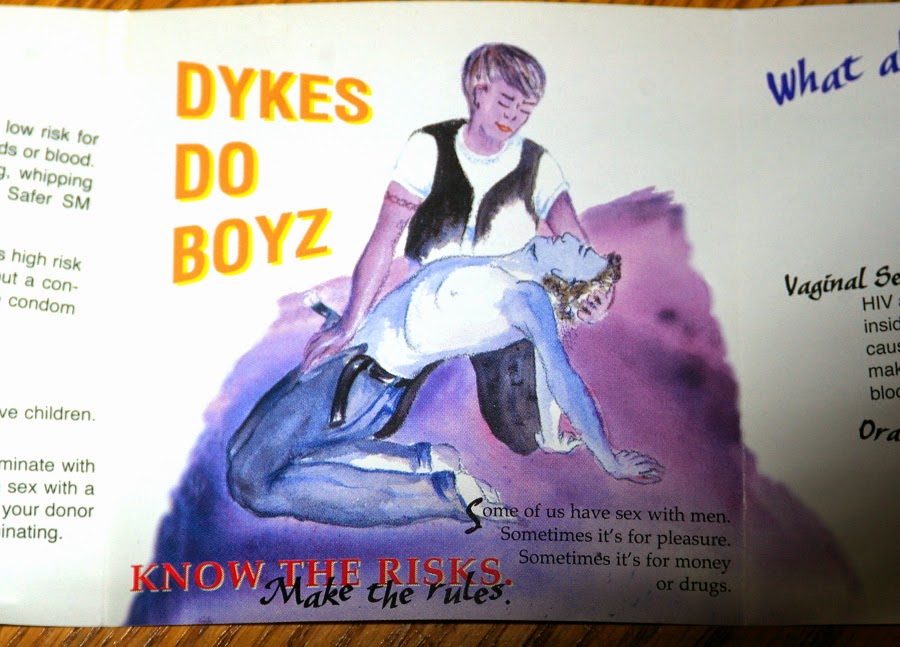 Love?  commitment?  Not if they can get to your child first, and inspire a cynicism deeper than that experienced in the Nazi Death Camps.

And hey, if you have HIV and pass it to the heterosexual population,
well, it was their own damn fault for being promiscuous with a lesbian. -
Reason (4).... 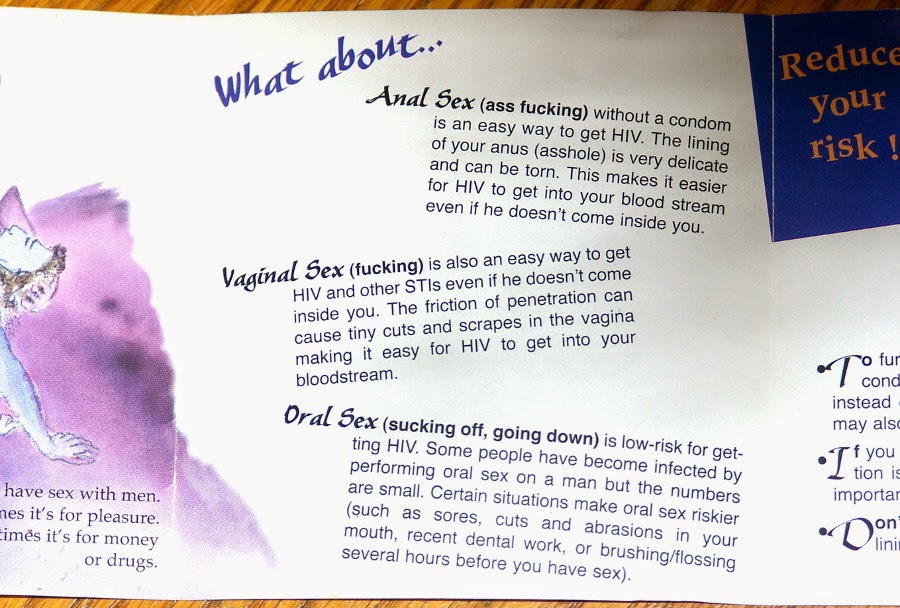 Oh thanks for the heads up on just a few of the token obvious risks, without which you couldn't peddle this pamphlet even to Liberal Educators. 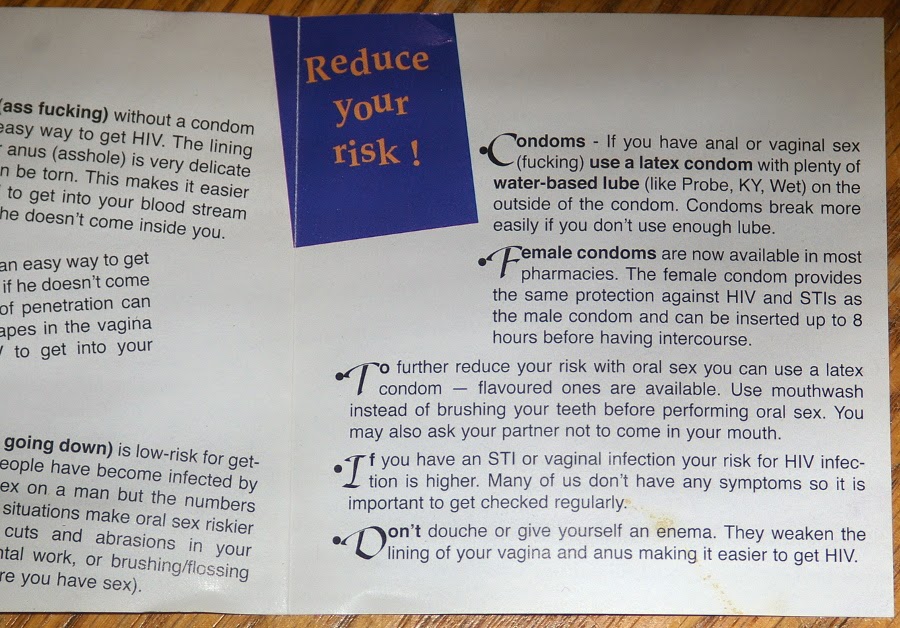 "Lets not forget to plug our network of pervert Sex-paraphernalia stores,
so we can get these kids to spend their disposable income (allowances)
on toys we like, and pick up the responsibility and the economic burden for any
whoring we may end up doing.

"No shame in mentioning brand-names either, seeing as these people slip us anonymous funding on the side.

And notice these idiots aren't shy in
recommending all kinds of 'folk-lore' pseudo-scientific 'medical' advice.
Hamas does the same for their children. 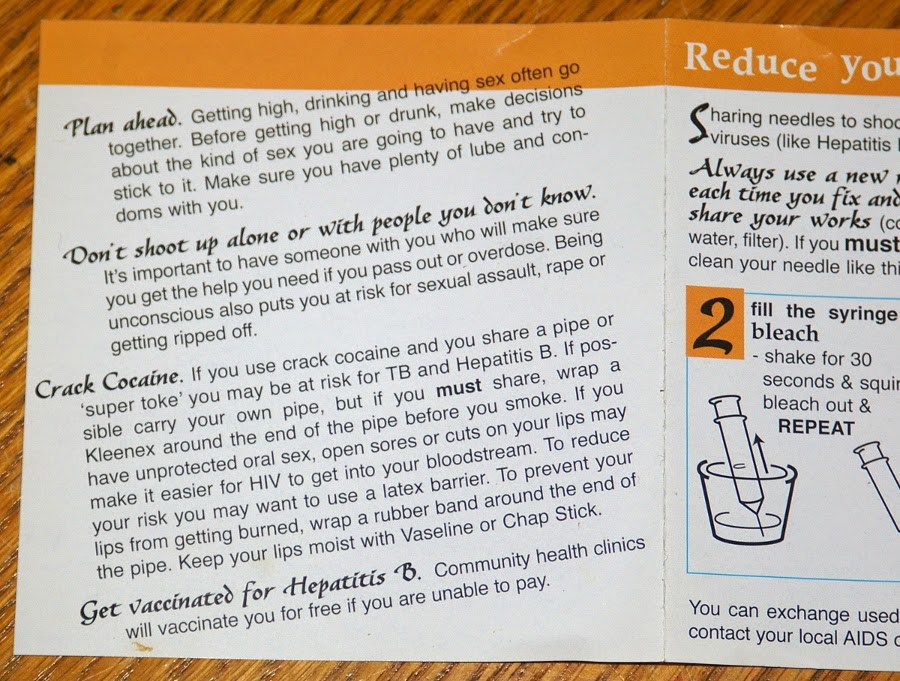 Yes, you are reading that right:
Rather than recommend that teens don't shoot hard drugs,
this pamphlet recommends you
'only try drugs with your friends or "people you know".

Because we all know that a child or teen's choice of friends will be a sensible protection against exploitation by strangers like the author of this pamphlet.
But in case teens don't know anyone who uses hard drugs,
there is always a 'new friend' only one secret phone call away on the last page.

Oh, and a little plug for vaccination (kids should do this on their own, because,
kids are really little adults, right, NAMBLA?)

And rather than openly advise kids to try shooting cocaine and heroin,
the Lesbian Alliance would rather do something positive, like give detailed
instructions on how to operate syringes; because we all know that it is just
as important to be able to shoot up a friend as it is knowing reading, writing, and arithmetic in grades 7 to 10. 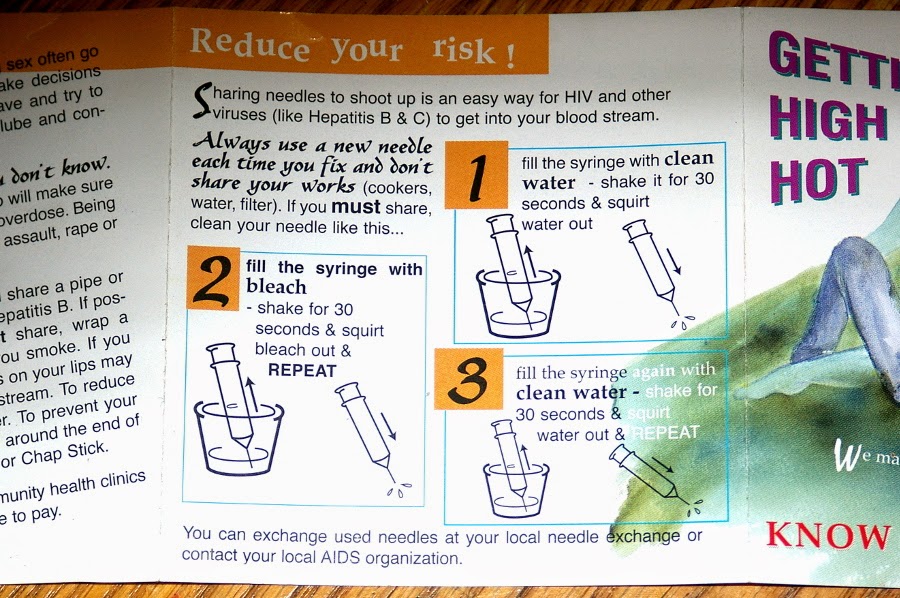 Next a few visual images to get those inexperienced kids used to the idea of two women doing each other, even if one of them does happen to be your gym teacher.

Because what adults have been hiding from you all along, especially your lying parents,  is that everybody really just likes to get high, and use drugs and alcohol to "cope" with stress, as opposed to work, play, going to the gym, or having a hobby. 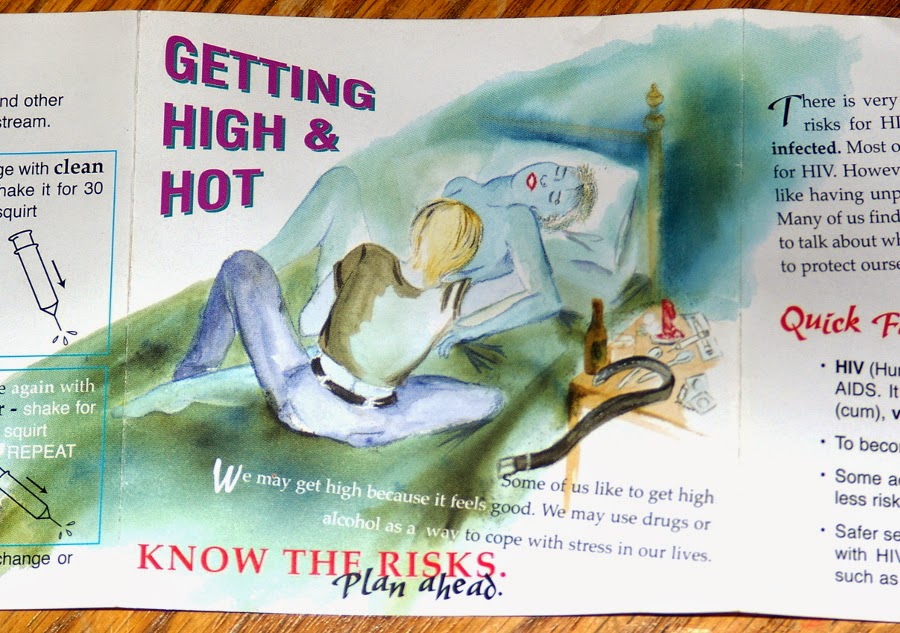 Now 'lesbians' have become ...."us..."...  funny how that happens.
I didn't even know I was a lesbian until I read this pamphlet and finally understood that I'm being repressed and kept in the dark by my parents, my neighbours, and just about everybody older than me.

And if I happen to be a boy who found this in the schoolyard behind the school, these strange feelings clearly mean I must then be ....gay!  Wow for a moment there I was confused. 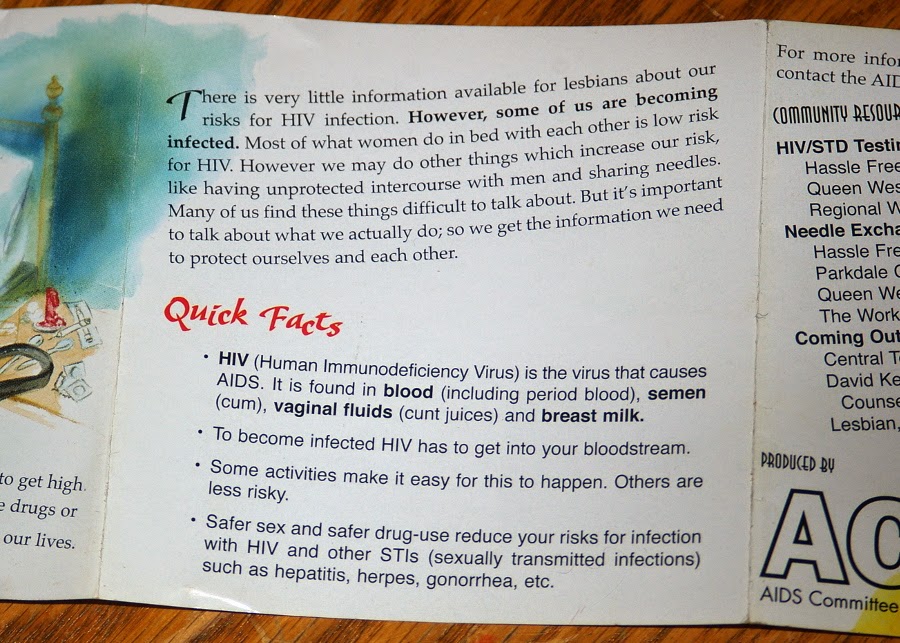 ...just enough space left after promoting the BDSM/LBGT lifestyle
for a few 'quick facts'.   But not too many.  -
It might distract us from the main purpose of this pamphlet...
trolling for victims among the most vulnerable in society.