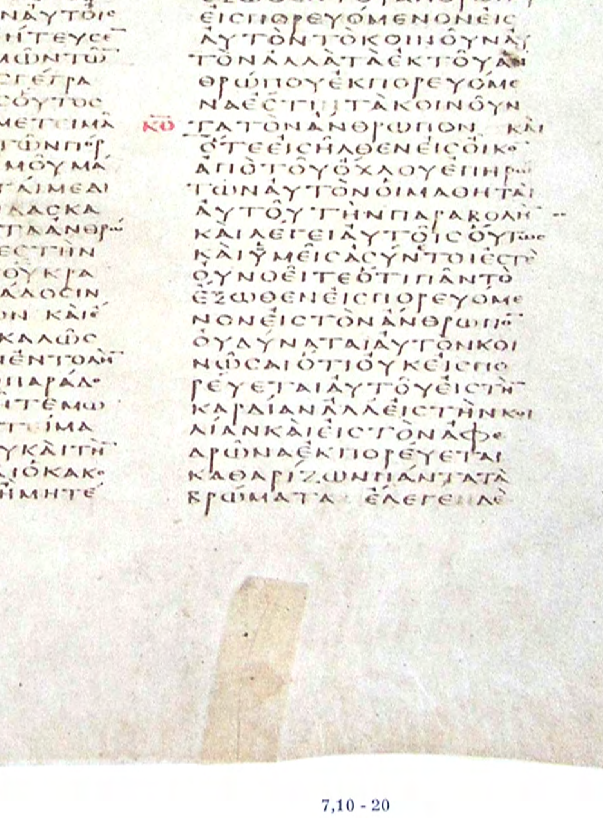 The Problem with this scripture is complicated by two layers of confusion.


The first concerns the Greek text.

While the Traditional (Majority/Received) Greek text of Mark reads as follows:


The Hort/Nestle/UBS text however, reads καθαριζων, ('[he was] purifying'), thus ending the quotation after εκπορευεται, and setting off the last phrase as Mark's explanation in the narrative (rather than a continuation of Jesus' speech). This reading is only supported by three manuscripts, Codex Sinaiticus (Aleph), Vaticanus (B), and Alexandrinus (A), against the entire corpus of thousands of other MSS.


What is the significance of the change? It represents a stage in the Romanization (Gentilizing) of the New Testament, in which early editors tried to remove the embarrassing "Jewish" elements and downplay the Jewish origins and teachings of Jesus and the Apostles, in the process of making Christianity the state religion of the Roman Empire.

We can see the significant impact of the alteration of a single letter in one word in the resulting translation:

"...everything from outside entering into the man
is not able to make him 'common';
because it doesn't enter into his heart,
but into the intestine,
and into the toilet passes,
purifying [the man] of all the foods..."


The Traditional text is straightforward, and simply states the obvious, that even if food temporarily enters a man, it also leaves again, restoring a man's purity (e.g. through fasting). There is no "magical" meaning attached to Jesus' words, nor is it needed, in order to make sense of the teaching.

"...everything from outside entering into the man
is not able to make him 'common';
because it doesn't enter into his heart,
but into the intestine,
and into the toilet passes."
- [he was ] purifying all foods...


Naturally, all 'modern' versions, based on these 4th century Roman heavily edited ecclesiastical texts make Mark say in the narrative that Jesus had "declared all foods clean".

But this not only rests on shakey textual ground, but it rests also on a super-imposed meaning based on Roman Catholic popular teaching.

When we look at the context, the correct reading is even clearer.

(1) Jesus lived as a law-abiding Jew during His public ministry.

(2) Had Jesus and His disciples been actually breaking the Jewish Food Laws, the Pharisees would hardly have quibbled about hand-washing, but would have accused Him (as they later did) of breaking with Jewish Law (Torah).

But the worst the Pharisees can observe is that some of Jesus' disciples forgot to wash their hands.

(3) Had Jesus taught that "all foods were clean" during His public ministry, all the Apostles would have long known of it, and Peter would have no need of any "vision" in Acts to clarify things.

(4) Nor would the Apostles in council have needed to review the matter and issue a simplified set of food-laws for Gentiles, if Jesus had taught that JEWS did not need to keep the Food Laws.

This is just another case of 19th century textual critics running after and idolizing a handful of 4th century manuscripts over and against the traditional text of the New Testament used by Christians for a thousand years.

Mark 7:19 is a good example of what happens when Protestants goof off, and let Roman Catholics write their bibles for them. The UBS Greek text was overseen by Cardinal Martin.