Obviously in the West, we get two basic views of the splintering of Christianity, that of the Protestants, and that of the Roman Catholics.


It might be refreshing to look alternately at the Greek Orthodox version of events, to assist us with some kind of consensus, at least as to what has exactly happened.

Here is the Greek Orthodox Diagram of the 'Great Schism' and subsequent events:

Greek Orthodox consider themselves to be true "Catholics", and other break-away groups essentially heretical and a result of apostacy.

Of course Greek Orthodox are in agreement with many of the basic historical facts, as shown on these timelines.    They would acknowledge for instance, the Sacking of Constantinople by the Latins (1204), and the Fall of Constantinople to the Muslims (1453):

Presumably these events are not interpreted as the 'hand of God' in judgement, but rather the consequences of the sin of others.  The main break for Greek Orthodox is between it and the Latin Roman Catholic Western half of Europe.  The Latins stand geographically between the Greek Orthodox East and the Protestant Reformation lands.   The split between the Roman Catholics and the Protestants is probably perceived as distant and less significant.


Not surprisingly, other smaller churches which branch off in the East see themselves as more central and emphasize details of their own dependence and distinctions:

Roman Catholics unsurprisingly see themselves as the central and true branch of Christianity, with others splitting off:


In this view, Roman Catholics happily garner support from Anglicans (Church of England), who have preserved much of the ritual of basic Catholicism, and also call themselves "catholic".   Rome nonetheless maintains its own doctrinal distinctions as central and authoritative, over and against Anglican traditions.

Protestant Groups naturally focus on their own origin and development, but the basic facts are usually not in serious dispute.  It is more a question of doctrine, practice, and authority which separates Protestants from 'Catholic' groups:


The larger Protestant churches, founded in the British Empire, Northern Europe and the West, tend to make themselves central:

Likewise we see Each Denomination providing their own idea of important events: 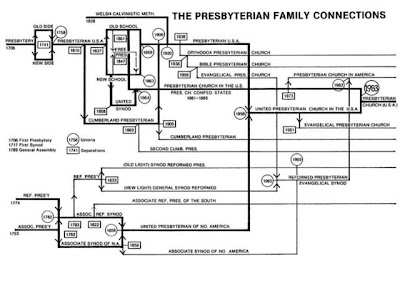 If self-centeredness were a contest, the United Church seems to have taken the cake in terms of Denomination-Centric presentations:

Ample proof that the church is not the kingdom of God.

...or that Protestantism is not "the church." It seems we need to go back *before* that time...