This description of one of the later editions of Erasmus' work highlights some of the key translational issues that began racing across Europe and inspiring the Reformation: 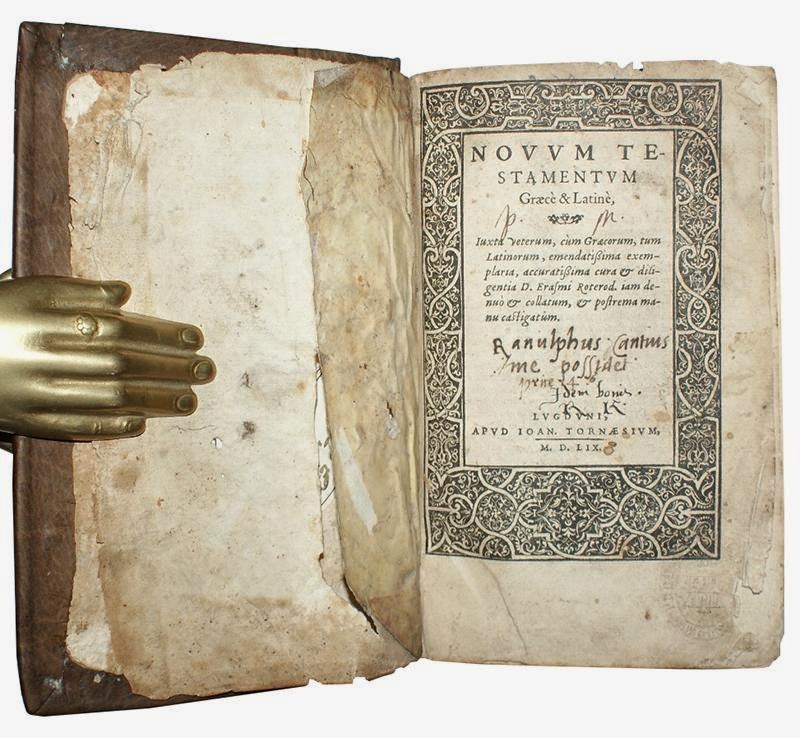 Erasmus' New Testament proved a major milestone in the critical study of scripture, the pinacle of humanist biblical scholarship and a drive of the Protestant Reformation. Inspired by his 1504 discovery of Lorenzo Valla's Collatio Novi Testamenti, Erasmus acheived a feat of Biblical Scholarship with his Novum Intrumentum (Basel, 1516), later retitled Novum Testamentum.

It was not only daunting in scope, but daring its questioning of the widely accepted and officially sanctioned Vulgate version of the New Testament, translated by Saint Jerome in the 4th Century from Hebrew and Greek manuscripts.

Erasmus acheived his two intentions in a humanist reevaluation of the New Testament from the original Greek manuscripts, reporting confidently in 1514 that he had improved Jerome's version in over a thousand places: eradicating erroneous corruptions and improving the sense of the often clumsy Vulgate with the use of a more classical style. First published in 1516 by Johann Froben of Basel, the combination of Erasmus's reputation for scholarship, the position of Froben's press and the official sanction of Pope Leo X, dedicatee of the work ensured the immediate sucess of this translation, with frequent reprinting throughout the C16th. A younger generation of Northern theologians who had been weened on the humanist revolution in scholarship, considered running of the sixteenth-century Catholic Church to be contrary o the doctrines outlined in early Scripture manuscripts.

What seemed like small textual alterations in Erasmus' re-translation were of great significance to the Reformers.
Luke I, 28 rephrased Gabriel's greeting of Mary at the Annunciation as 'Ave gratiosa', rather than the Vulgate's 'Ave gratia plena', thus suggesting that Mary's grace was inherent, rather than having been filled with the grace of God.
Perhaps most explosive was the interpretation of the Greek metanoeite in Matthew III, 2, John the Baptist's preaching in the the wilderness. The Vulgate translation, penitentiam agite, suggests the doing of penance - the justification of the Catholic church - whilst Erasmus proposed Resipiscite: the act of being penitent, a textual source for Luther's notion of 'justification by faith alone'.

This Lyonese edition preserves most of Erasmus' translation, including the 'Ave gratiosa' of Luke I, 28.   Matthew III, 2 has returned to the less inflammatory penitentiuam agite.