Daniel (Pt 18): The Ten Horns of the Fourth Empire


The Ten Horns of the Fourth and Final Empire are a natural difficulty for any
and every interpretation of Daniel's prophecy in chapter 7 .


... The fourth beast will be a fourth kingdom on the earth, which will be different from all the other kingdoms and will devour the whole earth and tread it down and crush it.   As for the ten horns, out of this kingdom ten kings will arise; and another will arise after them, and he will be different from the previous ones and will subdue three kings. ...(Dan. 7:23-24)

However those who claim that the author of Daniel is really an imposter faking prophecy by writing history in disguise around 169 BC are forced to construct
the most non-credible and disunited explanations for this section.

Because they want to compress Daniel into the tiny zone  c. 168-164 BCE,
they must try to identify the Ten Horns/Kings in this last era of the Greek Empire, which is a hopeless task:

'In addition, ...Rowley [arguing for a late date] completely fails to support the Grecian empire interpretation by any consensus among its followers, and his discussion is a hopeless maze of alternating views which he either rejects or accepts often as mere matters of opinion.
While the diversity of interpretation is indeed confusing to any expositor of this portion of Scripture, if the book of Daniel is a sixth-century writing, and therefore genuine Scripture, it follows, even as Rowley indirectly admits, that the Roman view is more consistent than the Greek empire interpretation. This is especially true among those following pre-millennial interpretation.'


The reasonably literalist interpretation of the chapter allows one to make straightforward connections to well-established history.

For instance, Emperor Constantine, although temporarily re-uniting the Roman Empire, completely transformed it, relocating his headquarters to Byzantium,
and effectively starting a brand-new Empire in the East, while simultaneously abandoning the Western half of the Empire (the Roman half) to barbarian hordes.

These barbarian tribes quickly moved in and took over many areas of
the old Roman West, permanently installing themselves as independent kingdoms.

The resulting lists of Ten Kingdoms (assumed by ten kings) in circa 475 A.D.,
is quite a sensible interpretation of the 'Ten horns' of Daniel 7, coming at the
end of the 'iron mixed with clay' phase of the Empire: 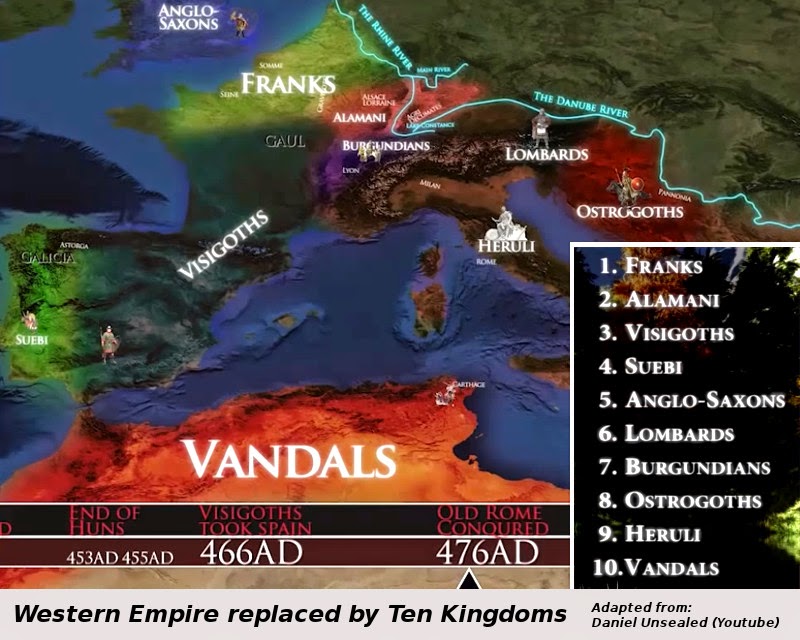 Other slight variants in the list of Ten Kingdoms are possible, and Gill's Exposition of the Entire Bible gives some reasonable alternative lists,
based on one's view of the relative importance of various kingdoms in Europe.

And the ten horns out of this kingdom are ten kings that shall arise,..... Or ten kingdoms which sprung out of the Roman empire, or into which it was broken and divided upon the dissolution of it, about A.D. 476; which,

according to Mr. Mede (k), were thus divided, A.D. 456,
1. Britons; 2. Saxons; 3. Franks; 4. Burgundians; 5 Visigoths; 6. Suevians and Alanes; 7. Vandals; 8. Almanes; 9. Ostrogoths; 10. Greeks.
The list Bishop Lloyd (l) has given of them is,
1. Hunns, who erected their kingdom in that part of Pannonia and Dacia, which was from them called Hungary, about A.D. 356. 2. Ostrogoths, who settled themselves in the countries that reach from Rhetia to Maesia, even to Thrace, about 377; and afterwards came into Italy under Alaricus, in 410. 3. Visigoths, who settled in the south parts of France, and in Catalonia, about 378. 4. Franks, who seized upon part of Germany and Gaul, A.D. 410. 5. Vandals, who settled in Spain; afterwards set up their kingdom in Africa, A.D. 407; their king Gensericus sacked Rome, 455. 6. Suevians and Alans, who seized the western parts of Spain, A.D. 407; and invaded Italy, 457. 7. Burgundians, who came out of Germany, into that part of Gaul called from them Burgundy, 407. 8. Herules, Rugians, and Thoringians, who settled in Italy under Odoacer, about A.D. 476. 9. Saxons, who made themselves masters of Great Britain about the same time, 476. 10. Longobards, called likewise Gopidae, who settled in Germany, about Magdeburg, A.D. 383; and afterwards succeeded the Heruli and Thuringi in Hungary, about the year 826.
Sir Isaac Newton (m) reckons the ten kingdoms in the following order:
1. the kingdom of the Vandals and Alans in Spain and Africa; 2. of the Suevians in Spain; 3. of the Visigoths; 4. of the Alans in Gallia; 5. of the Burgundians; 6. of the Franks; 7. of the Britons; 8. of the Hunns; 9. of the Lombards; 10. of Ravenna;

Even without 100% agreement on the list, the kingdoms are certainly real enough, and mark the end of the Roman Empire and even the original residents from that time.