The So-Called "Proof" of the Shell Theorem

Here is the typical "proof" for the Shell Theorem (the Hollow Sphere Theorem), as presented by university math faculties (this one was from saddleback.edu).

It was presented by a reader as "proof" that Newton was right about the force inside a uniform hollow sphere.  Of course the 'proof' does nothing of the kind.

As another reader posted, a "theorem" in mathematical parlance is a mathematical statement considered to be "proven true" only in the sense that the mathematical result follows logically from the starting premises and the application of appropriate algebraic and rules and conventions.  Even this idea of 'proven mathematically' isn't always clear, and theorems are constantly modified, limited, and expanded in the field of mathematics.

And a mathematical "proof" is not a in any sense a "physics" proof, which is based upon how well a given piece of mathematics actually applies to a physical situation, and its predictive power, when the mathematical variables and other elements are assigned to physical entities and measurements.

The so-called "proof" given begins by implicitly claiming to model a vague physical situation.  None of the items below are properly defined, and none of the physical theory relating the idealized abstract model and its elements and diagram to a physical reality is ever presented or articulated.  All of that remains not only unproven, but actually unstated.  The premises and assumptions remain unexposed.  Its appropriateness and accuracy of the theorem in encompassing a physical situation is left completely unexamined.

Essentially, the "proof" begins by ignoring the main physical problem.  The author might have happily begun by explicitly making the admission:

"This 'proof' does not expound any physical theory.  Nor does it examine the strength of the connection of its elements to physical realities.  For that see a physics textbook.  We are here only outlining a mathematical theorem: 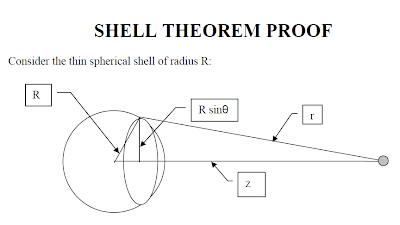 Unlike our own diagram, nothing here is properly explained or labelled.  None of the mathematical entities are described, and even key mathematical axioms and premises are left unacknowledged.  For instance, the application of Sin and Cos functions have no meaning, even in mathematical proof, without the assumption of a Euclidean Spacetime manifold. But this is one of the very things to be proved in a gravity theory, and something that requires explicit discussion.  We can't fault Newton for his ignorance of spacetime manifold options, but we can certainly fault a modern proponent of the "Shell Theorem" for failing to qualify his 'proofs' in the modern context. 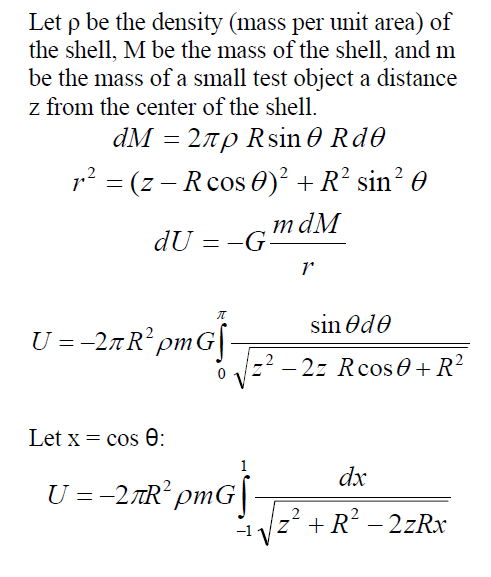 Remarkably, a form of Newton's classic gravity equation simply appears in the third line here without any qualification or explanation.  None of steps of the algebraic manipulation is shown, and none of the theorems or axioms required for these steps is given.  No derivation or justification for any of the steps that are show are explained. 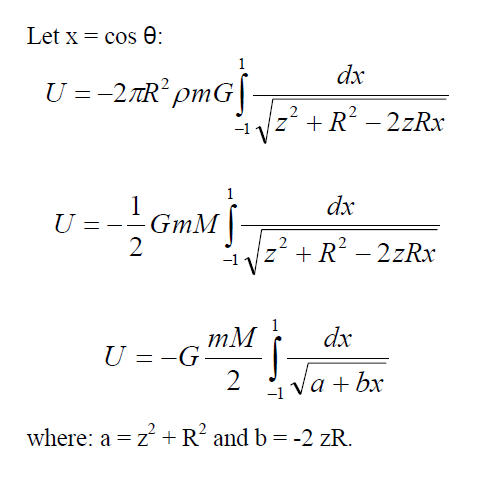 We now have an equation, an integral, to which someone has assigned a physical meaning, by identifying the elements in the equation with elements in the original physical problem.   While the substitution of variables and elements may be acceptable, the student/reader is left abandoned to the "God-like" presentation of the 'teacher'.  The only hope is memorization of the forms acceptable on the exam, when the question is posed.

Now comes the hilarious part of the "proof":

"From the Tables:..."  yes, that's right, the four difficult pages of real hardcore integration, and their theoretical underpinnings are skipped entirely, unlike our own appendix on the integration of this difficult integral (previous step).  Naturally the 1st year student is not expected to know how to actually integrate a function like this.  Like a trained monkey he must look it up in an advanced volume/table of Integrals, and simply jump to the next part of the problem.

This is not a formal 'proof' in fact of the Shell theorem or any other theorem.  Its a "memorize" the entry in a table method, and don't ask any questions style of teaching suitable only for dummies. 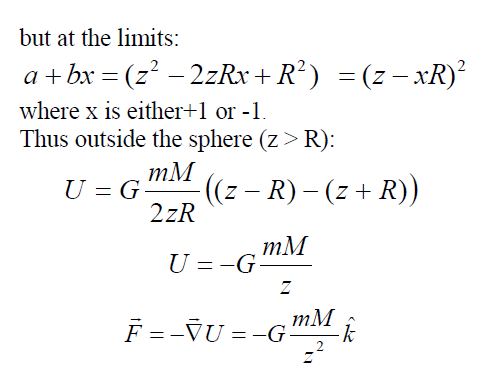 Now, magically, the Force Vector F just appears.  An algebraic equation has been derived (skipping all critical steps and techniques) for the force exerted on the object (not the sphere).  No explanation for how the mathematics has been connected to a real physical vector is given.  Essentially, all that has happened is that an equation from a book has been assigned a task. 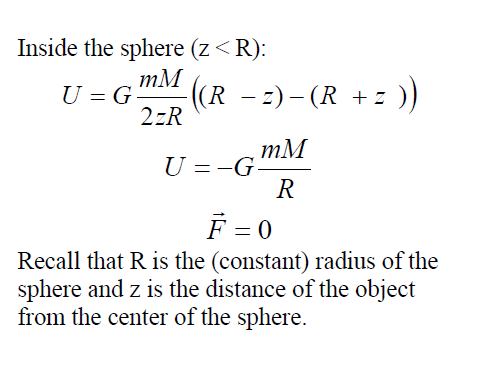 A similar phoney implicit step has been performed for the Force vector in the separate case when the point-object is inside the shell/sphere.  No notice of the failure of Newton's equation in the case where the particle is actually at the border of the shell is given.  No explanation for what happens when a particle pierces the shell, exits/enters,  is attempted.

The student is left with two equations, one of which reduces to a constant (0), but he has no idea of why there is no 'force' inside a 'uniform shell of insignificant thickness with its mass evenly distributed on its surface', or whether it is even true.

This is a classic example of the academic "bluster".

A bunch of algebra and some calculus references are waved in front of the inquirer, and they are just left feeling stupid, because in fact it is impossible to derive any proof of the Shell Theorem from this terse, highly condensed and deficient presentation of a complex operation which invokes literally hundreds of mathematical and physical assumptions.

The student is told to "go read the textbook discussion" on the Shell method of integration, or 'Newtonian Gravity'.    He does the only thing possible in such a ridiculous situation:  He memorizes the steps approved by the lecturer, gets his grade, and has no clue what is really transpiring in gravitational theory.