The Literal Interpretation of Genesis One (Pt 2): Hebrew Poetry and Prose 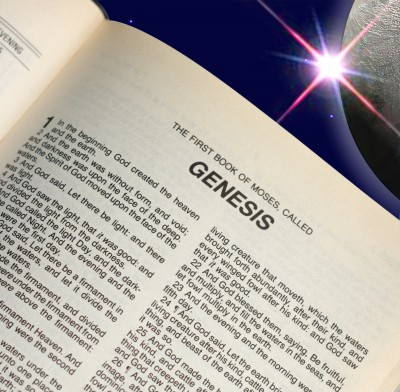 Roman Catholic Apologists, ever pushing Evolution and allegorical interpretations of the Bible in many places (especially prophecy * ),
also wish to downplay or avoid a literal interpretation of Genesis chapter One.
One apologist recently tried to sell Genesis One as a kind of 'hymn' or poetic allegory.


The creation account in Genesis 1 resembles a hymn, and is thus sometimes called the Hymn of Creation, or the Poem of the Dawn.

No reference is given.
Just disembodied unknown 'people' of unknown authority.
The bogus practice of using the Passive Voice to avoid identifying the Subject of the Action,
has long been recognized as a charlatan's debating technique.

Whenham indeed calls Genesis 1 a "hymn", but even he does not call Genesis 1 itself poetry. Instead he compares it to poetry such as that found not in Genesis, but in
the Book of Psalms:.

In his commentary, Wenham understands Genesis 1 to be unique in the Old Testament. He notes that it is neither typical poetry (Wenham 1987, p. 10) nor normal Hebrew prose as “. . . its syntax is distinctively different from narrative prose.” He instead calls it a “hymn” believing it to be elevated prose(Wenham 1987, p. 10). Wenham sees the use of phrases in day one that become a formula in the subsequent days as making the narrative highly stylized (Wenham 1987, p. 37). Because of this, Wenham believes Genesis 1


The poem [Psalm 8] might be described as a kind of summarizing paraphrase of the account of creation in Genesis 1 . . . The difference in form, however, between the two texts is crucial, and instructive. Genesis 1, being narrative, reports creation as a sequence of events . . . Psalm 8 assumes as a background this narrative process, but takes it up after its completion . . . (Alter 1990, p. 117).

From the  Jewish Encyclopedia:

PARALLELISM IN HEBREW POETRY:
It is now generally conceded that parallelism is the fundamental law, not only of the poetical, but even of the rhetorical and therefore of higher style in general in the Old Testament. By parallelism in this connection is understood the regularly recurring juxtaposition of symmetrically constructed sentences. The symmetry is carried out in the substance as well as in the form, and lies chiefly in the relation of the expression to the thought. The same idea is expressed in its full import—that is, in its various aspects and turns—not in a continuous, uninterrupted sentence, but in several corresponding clauses or members with different words. Hencethe name "parallelismus membrorum" or "sententiarum." It has also been aptly called "sinnrhythmus" (Ewald). For the parallel members are related to each other as rhythmical protasis and apodosis, as προῳδός and ἐπῳδός.
...
(1) The synonymous, in which the same sentiment is repeated in different but equivalent words (Ps. xxv. 5; comp. ib. exiv.; Num. xxiii. 7-10; Isa. lx. 1-3; etc.).

Teach me thy paths"


"The integrity of the upright shall guide them, But

the perversity of the treacherous shall destroy them"

(2) Its also a common feature of non-poetry, as stated above.


My opinion of the historical accuracy of Genesis 1 has no
bearing at all on whether or not its author intended it to be read
as narrative rather than poetry.

However, in hindsight, I think I would now modify my opinion:
As the first post in this thread correctly indicates,
after having taken a serious and thoughtful look at Genesis 1,
I have come to the conclusion first of all that it is indeed intended
to be a historical narrative, not poetry or parable.

Its accuracy is another matter, which I haven't evaluated,
except as to the question of its compatibility with what is known today
from science (see last half of first post).

I would now modify my original opinion,
and state that I would limit the allegorical or parable-like interpretation
of the Genesis text generally to the story of Adam and Eve.
However, even interpreting that text (Genesis 2 etc.)
as purely allegorical has its problems, because again,
from a scientific point of view there had to have been a physical
Adam and Eve, i.e., historical characters that were ancestors
at least of early (EME) Semitic tribes.

What I have shown however in this thread is that Genesis 1
most plausibly is read as a historical text.


I strongly suggest anyone try the following experiment:

(1) Find a few Jewish friends (more than one is a good idea).

(2) Make sure they can actually read Hebrew reasonably well.

(3) Ask them to take a fresh look at Genesis 1 in the Hebrew text.

(4) Limit your question to this very specific one:

"Regarding the form of the text here,
does this read to you more like poetry, or a simple narrative?"

(5) Just get him to commit on one simple question:

"Does the text look like narrative or poetry to you?"

Get all the other opinions you want from them, but nail them down
on this one question.
Do this with more than one Jewish person who can actually read Hebrew.

Then count up the votes.

* In regard to false versions of Prophetic Interpretation, see our articles on that elsewhere.